Katrina Kaif is upset about her bikini pictures appearing in the media.One wonders why because she wore a two-piece in Boom and even on Cosmo cover.

Says a close friend of the actress, “She blames herself entirely for what happened. She feels she should not have worn a bikini on a crowded beach.
The minute she saw Indians on the beach she regretted being so relaxed and casual even if on a private holiday.” 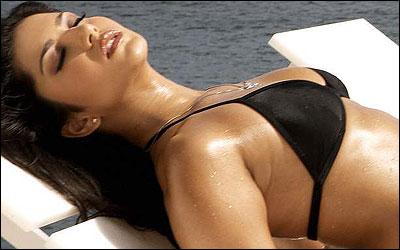 Katrina has resolved to never wear a bikini even on the beach. Says her friend, “Shorts and a top. That will be her mandatory beachwear from now on. This experience has taught Katrina never to let her guard down.” The pictures of Katrina Kaif holidaying on a beach in Spain has snowballed into a major controversy, what with the actress writing an open letter to the press questioning the  ethics of printing pics from a very private moment. Clearly, she is not familiar with how papparazzi works.

The no-bikini clause will now be a mandatory part of Katrina’s career. In fact, she isn’t wearing a bikini in Dhoom 3 either.

Apparently, Aditya Chopra did try to make Katrina embrace beachwear. “But Katrina persuaded Adi to drop the idea. They worked out a compromise that suited both of them. Post the leaked pictures of hers in Ibiza she is unlikely to get into a bikini no matter what the prompting,”