VARANASI: A fresh batch of 78 recruits of 39 Gorkha Training Centre (GTC) took oath with an impressive attestation and passing out parade at 39 GTC Parade Ground on Saturday. 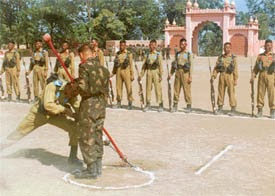 As per Nepali culture, the Gorkha recruits were given their traditional weapon -khukri on the occasion.

Col Amrit Pal Singh, Deputy Commandant of 39 GTC took first salute of the attestation parade. The chief guest Brig Kunwar Birendra Singh, Commandant 39 GTC reviewed the parade and praised the soldiers for their turn out and drill. In his address he emphasised on discipline, physical fitness and professional growth in life.

After oath taking ceremony, he paid tribute at war memorial. Other senior officers of army, guardians of recruits, soldiers and their families were also present on the occasion.

As many as eight riflemen were also awarded with different prizes for their outstanding performance during military training, on the occasion.

Seminar: The Varanasi branch of the Institute of Chartered Accountants of India organised a seminar on 'concurrent audit' on Saturday.

Surgical camp: The Hindu Seva Sadan Chikitsalaya is going to organise a special surgical camp at the hospital on Sunday.