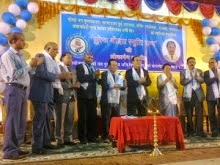 The ‘Surendra Poddar Smriti Granth’ was released by the chief guest, former IG (Jail) Krishna Singh Moktan, amid a program organized by the Gorkha Jan Pustakalaya, Kurseong, and the Vishnumaya Sharma Foundation, Kurseong, in the Community Hall. The book that contains a collection of memories on Mr Poddar was edited by litterateur Chandra Sharma.

Addressing the programme, the speakers lauded the multi-talented Mr Poddar and his contribution to society. “He will always live with us like a shining star,” Mr Moktan, also a literary figure, said.

A motivational booklet filled with qoutes of Swami Vivekananda and translated into Nepali language by Shishupal Sharma was also released on the occasion. Mr Poddar died on 20 June 2013 after a long battle with health problems.