Home > Siliguri > The first Siliguri Carnival gets a mascot — a leopard cub.

The first Siliguri Carnival gets a mascot — a leopard cub.

The first Siliguri Carnival next month has got a mascot — a leopard cub.

The cub needs a name, though, before the December 15-21 carnival begins.

The carnival is being held at this time of the year as Siliguri town, the transit point to the hills and the Dooars, will see many travellers during the winter tourism season.

North Bengal development minister Gautam Deb, who is the chief patron of the event, said the event here was designed according to the Goa and Rio carnivals.

“There would be weeklong events, fun, frolic, discussions, seminars and awareness campaigns, involving people from all age groups and communities dwelling in Siliguri,” he said.

Suggestions on the mascot’s name would be sought from the people of Siliguri. 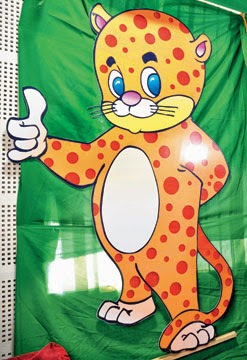 Siliguri will also get its theme song, composed by prominent Bengali singer-cum-composer Nachiketa. “We also intend to organise a show of Satyajit Ray’s films and will have his son Sandip Ray among us. Singer Kunal Ganjawala is expected to perform at the carnival,” one of the organisers said.

“We are inviting names from Siliguri citizens and everybody else for the mascot. The name is likely to be finalised by next week,” said Saptarshi Nag, Siliguri Municipal Corporation secretary, said.

“People are already suggesting names on the Facebook page. We hope more responses to pour in.”

Deb said events would be held in boroughs (cluster of wards) for children, youths, women and senior citizens.

“There would be centralised competitions and events and also cultural functions in each borough. We have selected some of the sites where these functions would be held,” the organiser said.