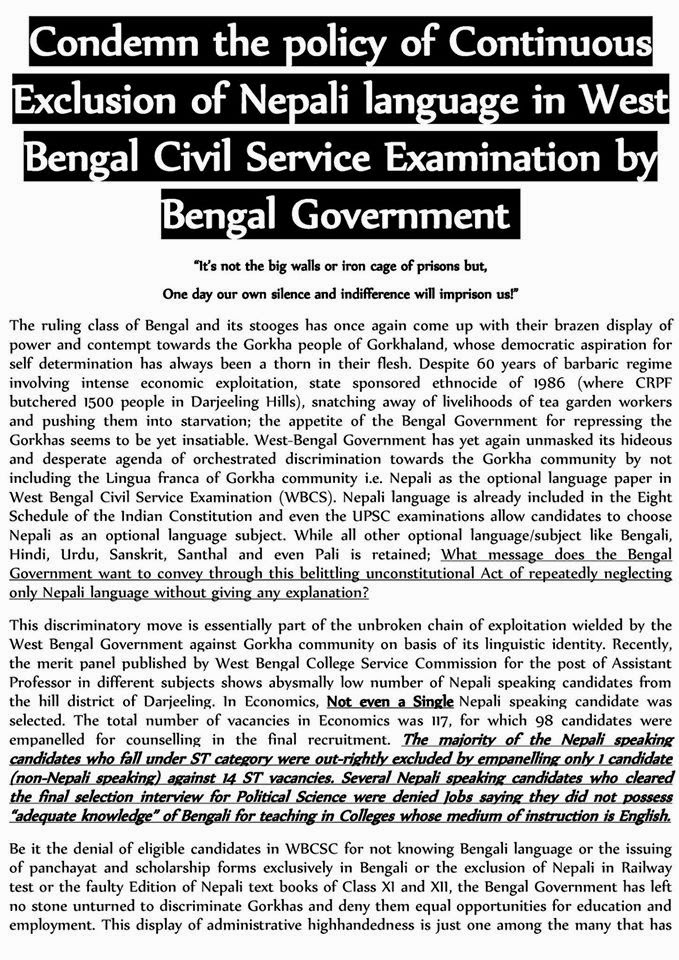 “It’s not the big walls or iron cage of prisons but,
One day our own silence and indifference will imprison us!”

The ruling class of Bengal and its stooges has once again come up with their brazen display of power and contempt towards the Gorkha people of Gorkhaland, whose democratic aspiration for self determination has always been a thorn in their flesh. Despite 60 years of barbaric regime involving intense economic exploitation, state sponsored ethnocide of 1986 (where CRPF butchered 1500 people in Darjeeling Hills), snatching away of livelihoods of tea garden workers and pushing them into starvation; the appetite of the Bengal Government for repressing the Gorkhas seems to be yet insatiable. West-Bengal Government has yet again unmasked its hideous and desperate agenda of orchestrated discrimination towards the Gorkha community by not including the Lingua franca of Gorkha community i.e. Nepali as the optional language paper in West Bengal Civil Service Examination (WBCS).

Nepali language is already included in the Eight Schedule of the Indian Constitution and even the UPSC examinations allow candidates to choose Nepali as an optional language subject. While all other optional language/subject like Bengali, Hindi, Urdu, Sanskrit, Santhal and even Pali is retained; What message does the Bengal Government want to convey through this belittling unconstitutional Act of repeatedly neglecting only Nepali language without giving any explanation?

This discriminatory move is essentially part of the unbroken chain of exploitation wielded by the West Bengal Government against Gorkha community on basis of its linguistic identity. Recently, the merit panel published by West Bengal College Service Commission for the post of Assistant Professor in different subjects shows abysmally low number of Nepali speaking candidates from the hill district of Darjeeling.

Be it the denial of eligible candidates in WBCSC for not knowing Bengali language or the issuing of panchayat and scholarship forms exclusively in Bengali or the exclusion of Nepali in Railway test or the faulty Edition of Nepali text books of Class XI and XII, the Bengal Government has left no stone unturned to discriminate Gorkhas and deny them equal opportunities for education and employment.

This display of administrative highhandedness is just one among the many that has come to notice recently. It is certainly not an aberration but rather a reflection of the Deep Rooted Colonial Practice of the Ruling Class that has continuously strived to use exploitative tools to dominate Gorkhas and curb all possibility of their development and self-assertion.

The deliberate political domination of Gorkhas historically has been operationalised through different forms of ‘othering’ of the community- Culturally, Administratively, and Economically. Behind this unabashed audacity is the sheer insecurity and arrogance of the political masters of Bengal that is continuously masterminding obnoxious ways to trample upon the aspiration of Gorkha candidates and spread discouragement, despair and insecurity. This is one among the many used tactics of the Bengal Government to retain their hegemonic control over White Collar Jobs - a domain they consider only themselves suitable for and not for the Gorkha to aspire. Their interest lies in keeping Gorkhas in subordinate positions vis-a-vis the Bengali speaking majority in West Bengal.

The rampantly visible endemic unemployment among educated youths, high rate of human trafficking, massive distress migration for low-end and low paying jobs and rising drug abuse are not isolated phenomena but in fact organically connected to the denial of equal opportunities to the Nepali speaking population in every socio-political and economic sphere by every ruling class that has governed Bengal. The heinous part is that the success of the state’s propaganda in spreading hate-mongering also reflects in prejudiced opinions in the social media such as “how many Nepalese sit for civil services?”.

These colonial expropriation polices of the Bengal government must be Exposed and Condemned. The future of our present and coming generations should not be allowed to be continuously manipulated and wrecked by the Bengal Government and a few other local leaders who have repeatedly betrayed the faith and support of the masses.

The silence or indifference maintained by the intellectuals of Gorkha community for a long time on such pertinent issues is also perplexing. Political leaders who are disconnected from prime concerns of suffering masses and the intellectuals succumbing to conformism will only strengthen this regime of exploitation. The continuance of such an exploitative relation that only engineers to obstruct the aspirations of Gorkhas in every realm of life reiterates the utmost and uncompromisable need for immediate Separate Statehood and realization of our Political Identity.

We strongly condemn the open and highly discriminatory move of the state to jeopardize the careers of Nepali speaking candidates from Gorkhaland. We urge all progressive thinking organisations and individuals to come forward and condemn the arrogant display of racial and communal discrimination by the West Bengal Government.