Sikkim- The prestigious Kanchenjunga Kalam Puraskar 2015 was on Friday conferred upon senior litterateur and journalist Shamiran Chettri ‘Priyadarshi’ by the Press Club of Sikkim (PCS) during its 13th foundation day function. 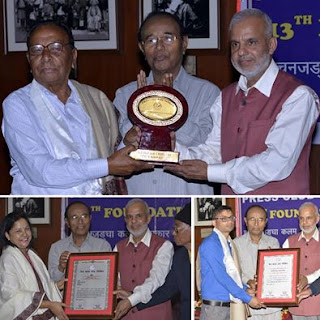 Chettri, 81, has served media of Sikkim and Darjeeling hills for more than three decades. He is currently staying at Siliguri.

Thanking the PCS for recognizing his long service to the media, Chettri said the award gives the message to all that dedicated service yields rewards. There may not be big money or security in media profession, but there is satisfaction, he said.

Mrs Mala Rana Patro was felicitated by the PCS on the occasion for her long service to Sikkimese media. She was recognized for giving regularity to two local dailies – SIKKIM EXPRESS and Himali Bela for the past three decades.