Dr. Rohit Sharma on Non-Inclusion of Nepali as Optional Paper in WBCS

Slamming the non-inclusion of Nepali as an Optional paper in WBCS, former Kurseong MLA Dr. Rohit Sharma has called for collaborative protests against this blatant act of discrimination.

Speaking to the Press, Dr. Sharma stated, "I raised this issue in the legislature numerous times, I raised this issue with Mamata Banerjee, with the Home Secretary, with the Chief Secretary and Chairman of PSC West Bengal, and every time I raised this issue, they assured me that in 2016 WBCS examinations, Nepali will be added as an optional paper. But look at this, once again they have deceived the hill people and neglected our concerns... this shows the discrimination that we have to suffer... I condemn this whole heartedly."

1. Introduction of Nepali as an Optional paper in WBCS
2. Appointment of a Gorkha intellectual as a member of the West Bengal PSC, in order to ensure fairness of the interview process, and
3. Shifting of WBCS mains examination center from the plains to the hills, so that the hill students do not have to suffer.

Despite repeated assurances from Bengal government officials, none of these demands have been fulfilled.

Dr. Sharma stated, "The blatant discrimination against our language and our people needs to be condemned widely and all the hill people should speak against this with one voice..."

He further said that, "I will continue to fight for this cause and I will not rest till the demands I have met are fulfilled."

It is a matter of great sadness that other than Dr. Rohit Sharma no one else has spoken out against this issue. From "intellectuals" like Dr. Mahendra P Lama to Dr. Harka Bahadur Chettri... from political parties like GNLF to CPRM and ABGl, no one has even said a word against this issue.

Forget public figures, even the students organizations such as GJVM, SFI, NSUI, Chattra Parishad or Youth organizations like GJYM, DYFI, Youth Congress, TMC Youth no one has spoken out. 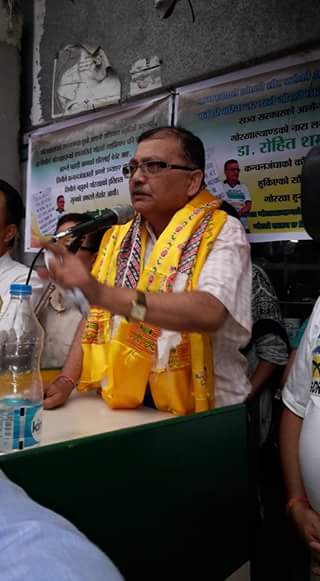