Bengal Invites GTA for Talks on Regularizing Over 5000 Casual Staff

The Bengal government has invited the GTA for talks at Nabanna on January 29 to discuss the long-pending demand of the regularisation of jobs of over 5,000 causal employees at the hill body.

"We received a communication yesterday saying the state government had called a meeting on January 29. The home secretary, Moloy De, will chair the meeting as he is also in charge of the hill affairs department," Roshan Giri, the general secretary of the Gorkha Janmukti Morcha as well as an executive GTA Sabha member, said today.

"I will be attending the meeting at Nabanna (Howrah). The regularisation of casual staff is an important issue for the GTA. That is the only agenda of the meeting," he added.

The state's invitation to the GTA for the bipartite meeting has come a few days after the Morcha rejected chief minister Mamata Banerjee's call for talks on any issue.

Mamata had said in Siliguri on Thursday that if anyone had problems, they should meet her for talks and there should not be agitation in the Darjeeling hills.

The next day, Morcha president Bimal Gurung said he would meet the chief minister only if she declared that she would put an end to the state government's alleged "divide and rule" policy in the hills and agreed to talk on Gorkhaland.

At the moment, there are 5,321 casual employees at the GTA and since 2007, they have been demanding that they be made permanent. According to the Janmukti Asthai Karmachari Sangathan, which is an affiliate of the Morcha, the hill body has now 4,011 vacancies.

On May 14 last year, the high court had asked the state government to convene a meeting with the GTA in four months to decide how it would set in motion the process of absorbing the casual employees of the GTA.

In the order, Justice Sanjib Banerjee also told the state to allow two representatives of the JAKS, the sole association of casual employees at the GTA, to attend the meeting on the regularisation.

But soon after, the state filed an appeal with the division bench and the directive was stayed.

On September 17, 2009, following a hunger strike, the state government had given a written assurance to the JAKS.

A fax sent by the then home secretary Ardhendu Sen had stated: "The government has authorised the DGHC to start regularisation process against the sanctioned vacancies in all categories which it is authorised to do as per the existing act and the recruitment rules there under."

The fast was lifted following the assurance. The state government, however, went back on its assurance.

In 2011, the government decided to do away with the six-month contract system for the casual staff. 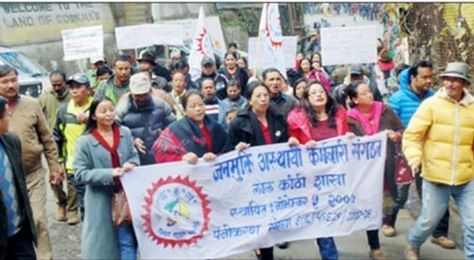