Home > nepali > Facts about Gurkhas or rather Gorkhas

Facts about Gurkhas or rather Gorkhas

1) Gurkha is spelled as Gorkha in Nepali, the correct way to pronounce it (Gor-kha).

2) Gorkha is a Sanskrit word which means Protector of Cows, Gau(Cow)+Rakha(Protector)=Gorkha.

3) Gorkha is one of the 75 districts of modern Nepal. It is a misconception that the Gurkhas took their name from the Gorkha region of Nepal. The region was given its name after the Gurkhas had established their control of these areas. In the early 1500s some of Bappa Rawal's descendants went further east, and conquered a small state in present-day Nepal, which they named Gorkha in honour of their patron saint.

5) Gorkha are people from Nepal and North East India who take their name from the eighth century Hindu warrior-saint Guru Gorakhnath. His disciple Bappa Rawal, born Prince Kalbhoj/Prince Shailadhish, founded the house of Mewar. Later descendants of Bappa Rawal moved further east to found the house of Gorkha, which in turn founded the Kingdom of Nepal.

6) The Gurkhas were designated by the British as a Martial Race. Martial Race is a designation created by officials of British India to describe "races" (peoples) that were thought to be naturally warlike and aggressive in battle, and to possess qualities like courage, loyalty, self sufficiency, physical strength, resilience, orderliness, hard working, fighting tenacity and military strategy. The British recruited heavily from these Martial Races for service in the colonial army.

7) Gurkhas claim descent from the Hindu Rajputs and Brahmins of Northern India, who entered modern Nepal from the west. Guru Gorkhanath had a Rajput Prince-disciple, the legendary Bappa Rawal, born Prince Kalbhoj, founder of the house of Mewar, who became the first Gurkha and is said to be the ancestor of the present Royal family of Nepal.

8) The legend states that Bappa Rawal was a teenager in hiding, when he came upon the warrior saint while on a hunting expedition with friends in the jungles of Rajasthan. Bappa Rawal chose to stay behind, and care for the warrior saint, who was in deep meditation. When Guru Gorkhanath awoke, he was pleased with the devotion of Bappa Rawal. The Guru gave him the Kukri knife, the famous curved dagger of the present day Gurkhas. The legend continues that he told Bappa that he and his people would henceforth be called Gurkhas, the disciples of the Guru Gorkhanath, and their bravery would become world famous. He then instructed Bappa Rawal, and his Gorkhas to stop the advance of the Muslims, who were invading Afghanistan (which at that time was a Hindu/Buddhist nation). Bappa Rawal took his Gurkhas and liberated Afghanistan - originally named Gandhar, from which the present day Kandahar derives its name. He and his Gorkhas stopped the initial Islamic advance of the 8th century in the Indian subcontinent for the time being.
There are legends that Bappa Rawal (Kalbhoj) went further conquering Iran and Iraq before he retired as an ascetic at the feet of Mt. Meru, having conquered all invaders and enemies of his faith.

9) It is a misconception that the Gurkhas took their name from the Gorkha region of Nepal. The region was given its name after the Gurkhas had established their control of these areas. In the early 1500s some of Bappa Rawal's descendants went further east, and conquered a small state in present-day Nepal, which they named Gorkha in honour of their patron saint.

10) By 1769, through the leadership of Sri Panch (5) Maharaj Dhiraj Prithvi Narayan Shahdev (1769-1775), the Gorkha dynasty had taken over the area of modern Nepal. They made Hinduism the state religion, although with distinct Rajput warrior and Gorkhanath influences. Thus the modern Nepal as we know it today was created as one nation, one kingdom.

11) A Gurkha can be of any caste, creed or race (since there are racial variations in Nepal) but only a Hindu (that includes Nepalese Buddhists) can be a Gurkha, since it is de rigueur that one believes in the teachings of Guru Gorkhanath and the Warrior code of the Ancient Hindus. Without these teachings one cannot develop the mindset, spirit, essence and soul of a Gurkha.

12) Although Hinduism is a general term encompassing a wide variety of faiths in the sub-continent, both Vedic and non-Vedic, it is worth mentioning that the Bon religion, an animistic, shamanistic faith is also practised by certain ethnic tribes that have also become encompassed and brought into the circle of the Gorkhas and thus should also be noted as being part of the Gorkhali culture.)

13) In the Gurkha War (1814–1816) they waged war against the British East India Company army. The British were impressed by the Gurkha soldiers and after reaching a stalemate with the Gurkhas and making Nepal a protectorate they were granted the right to hire them as mercenaries organised in Gurkha regiments in the East India Company army with the permission of then prime minister, Shree Teen (3) Maharaja (Maharana) Jung Bahadur Rana, the first Rana Prime-minister who initiated a Rana oligarchic rule in Nepal. Originally Jung Bahadur and his brother Ranodip Singh brought a lot of upliftment and modernisation to Nepalese society, the abolishment of slavery, upliftment of the untouchable class, public access to education etc. but these dreams were short lived when in the coup d'etat of 1885 the nephews of Jung Bahadur and Ranodip Singh (the Shumsher family or Satra (17) Family, later to be known as S.J.B. or Shumsher J.B.) murdered Ranodip Singh and the sons of Jung Bahadur and took control of Nepal bringing one of the darkest periods of Nepalese history (104 years of dictatorial rule). This Shumsher Rana rule is regarded as one of the reasons of Nepal lagging behind in modern development and a dark age of Nepalese History. The children of Jung Bahadur and Ranodip Singh mainly live outside of Kathmandu, in Nepal and mainly in India after escaping the coup d'etat of 1885. Relations among family members have now normalized.

14) The Gurkhas from reputed families refused to enter as soldiers and were instead given positions as officers in the British-Indian armed forces. The common peasant/farmer/village Gurkhas entered as soldiers. One Gurkha, the Great Great Grandson of Sri Teen Maharaja Jung Bahadur, was entered as officers, (retired) General Narendra Bahadur Singh, Gorkha Rifles, rose to become aide-de-camp (A.D.C.) to Lord Mountbatten, the last Viceroy of India, when he was only a young Captain in the British Indian Army. After the British left India Gorkhalis continued seeking employment in British and Indian forces, as officers and soldiers, as well as maintaining the sovereignty of their nation.

15) Under international law present-day British Gurkhas are not treated as mercenaries but are fully integrated soldiers of the British Army, operate in formed units of the Brigade of Gurkhas, and abide by the rules and regulations under which all British soldiers serve. Similar rules apply for Gurkhas serving in the Indian Army.

16) “As I write these last words, my thoughts return to you who were my comrades, the stubborn and indomitable peasants of Nepal. Once more I hear the laughter with which you greeted every hardship. Once more I see you in your bivouacs or about your fires, on forced march or in the trenches, now shivering with wet and cold, now scorched by a pitiless and burning sun. Uncomplaining you endure hunger and thirst and wounds; and at the last your unwavering lines disappear into the smoke and wrath of battle. Bravest of the brave, most generous of the generous, never had country more faithful friends than you". -Professor Sir Ralph Turner, MC, who served with the 3rd Queen Alexandra's Own Gurkha Rifles in the First World War

17) "For over 180 years the Gurkhas have helped to fight Britain's wars and keep the peace. They have won 13 Victoria Crosses and served in most of the major conflicts of the 20th Century." (The Victoria Cross is the highest and most prestigious award for gallantry in the face of the enemy that can be awarded to British and Commonwealth forces.)

18) "If there was a minute's silence for every Gurkha casualty from World War 2 alone, we would have to keep quiet for two weeks 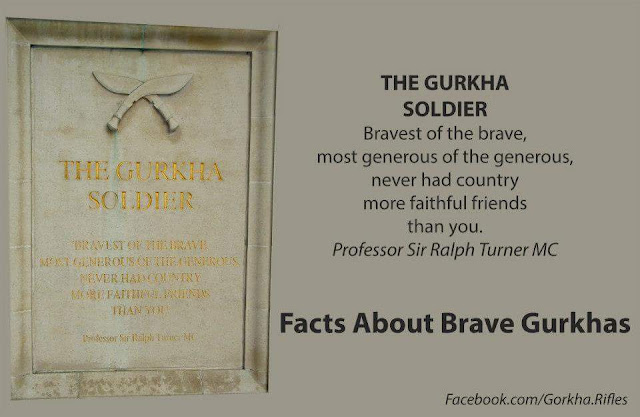