A stone was allegedly thrown on the convoy of Gorkha National Liberation Front (GNLF) president Mann Ghisingh in Kurseong town as he returned from a public meeting in Garidhura in the plains on Monday. The GNLF has filed an FIR at the Kurseong police station in this regard, while the police said they have already arrested the accused.

Talking to reporters, GNLF Kurseong branch president Daya Dewan said that they held a rally and a meeting at Garidhura on Monday and that they were returning from there in the evening when one person hurled a stone on the convoy and hit the vehicle of Mann Ghisingh. “The person also used foul languages. However, as CRPF personnel had been deployed there, the person was immediately arrested,” Dewan said.

According to him, the arrested person belonged to the youth wing of the Gorkha Jan Mukti Morcha (GJMM) and a resident of Giddhapahar in Kurseong. Sources said he was drunk. Kurseong Police IC Sukumar Ghosh said that as police personnel had already been deployed near the Kurseong Motar stand, the situation did not get out of hand.

Ghosh said that a case has been filed against the accused, Neeraj Khawas. Notably,campaigning for the demand for the sixth schedule status of the Indian constitution for Darjeeling Hills, the GNLF has been organising rallies and meetings at different places in and around Kurseong. Party general secretary Mahendra Chettri said that after Kurseong, they will organise such programmes at different places in Darjeeling and Kalimpong subdivisions. 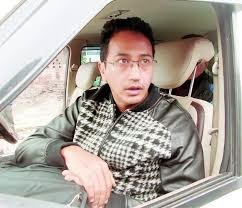