GJM to complaint against development boards to Election Commission

It’s election time and things have started heating up in the hills. For one, the Gorkha Janmukti Morcha has decided to lodge a complaint with the Election Commission against the community development boards formed by the state government for allegedly violating the model code of conduct.

GJM general secretary Roshan Giri yesterday said the chairmen of the Sherpa, Bhutia, Tamang, Mangar, Khambu Rai and Limbu community development boards held an indoor meeting on Friday in Darjeeling where they decided to support the Trinamool despite holding offices of profit.

On Friday, representatives and members of the six associations under the radar held a meeting to decide ways to pursue measures for safeguarding and promoting their tradition, culture and language. The contentious issue of which party to support in the election was also discussed in the meeting and the associations unanimously decided to extend support to that political party (read TMC) that had helped the communities. 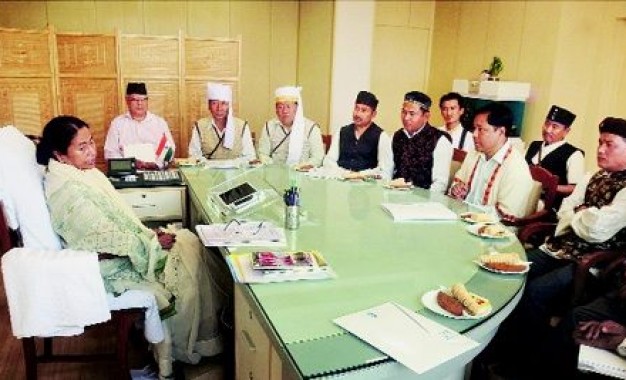 However, all the six chairmen had clarified the meeting was not convened by the development boards but by the associations and that they had not forced any member to vote for the TMC or any other political party.

“We will approach the ECI and lodge complaints against the six development boards for violating the model code of conduct. How can officials of development boards that function under the state government speak for a party? These officials receive salary and vehicles and other perks from the state government,” Giri said following the public meeting held by the GJM this afternoon in support of the party’s candidate from Darjeeling.

Nonetheless, the GJM general secretary was quick to add that the development boards would not affect his party’s prospects on April 17, the day of voting. “We are more concerned about polling being fair and clean even though we are confident of winning handsomely even if the development boards support the TMC,” he said.

GJM president Bimal Gurung also echoed Giri saying the Mamata Banerjee-led TMC would taste defeat, in spite of the state government showering money worth crores to the boards ahead of the election. “She has spent crores on the development boards just to garner votes. But one must remember that when it comes to issues pertaining to identity, statehood and aspirations, the hills will always remain united even if more doles are offered,” he said.

“The state government may try to tear us apart by creating divisions. But we will keep on mending the damage until we achieve statehood,” thundered Gurung to loud applause from the crowd gathered at the Motor Stand area of town.

According to the GJM chief, Prime Minister Narendra Modi’s promise during his April 7 speech in Siliguri that the 11 communities of the hills would be granted tribal status was a stepping stone towards achieving statehood. “Modi-ji himself told me that day that the 11 communities would be granted tribal status. I would like to remind you that he once said the dreams of the Gorkha people were his dreams too. We must remember that things are achieved one at a time,” said Gurung, adding he has invited the prime minister to Darjeeling.

Darjeeling GJM candidate Amar Singh Rai trained his guns on the TMC-JAP-GNLF ‘jote’ (alliance) saying it was temporary and that its intentions were ill. “JAP says development is its priority, the GNLF wants Sixth Schedule status and the TMC is anti-Gorkhaland. The alliance is an unholy nexus against our statehood aspiration and will be scattered when they taste defeat,” he said.

Meanwhile, the other GJM leaders who spoke at the campaign meeting appeared more interested in denouncing JAP president Harka Bahadur Chhetri than rallying for the party candidate.