Shri Subash Ghisingh always advocated that whole Gorkha community should be granted the status of Scheduled Tribe in India as per the census of 1931 of British Raj in India, which had shown all Gorkha community as “Tribes” under the banner of “Hill Tribes”. Further he knew it clearly that, if Gorkhaland is to be achieved in coming days, than, all Gorkhas communities should stand-up unitedly at any cost, therefore, he came up with his political strategy of Sixth schedule & Schedule Tribe for all gorkahs, so that the Indian Gorkhas may “exist together” united in one banner of “Gorkha as a Tribe (ST)”. 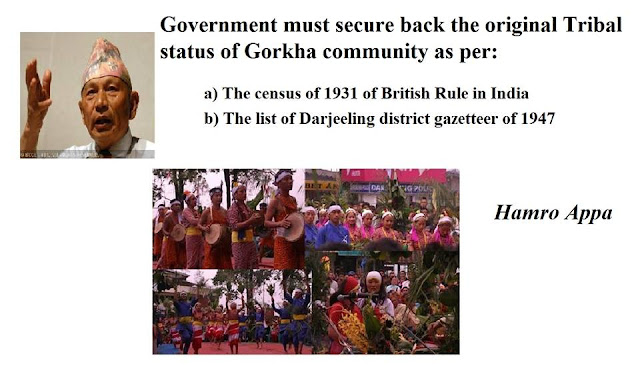 His Letter to the National Commission for ST:

I would like to expressed my thanks and gratitude for granting scheduled tribe status to “Tamang” and “Limbu” of India which was done vide Govt. of India Gazette Notification no 10 dated New Delhi the 8th January 2003. However, this action of govt. of Indian has created confusion, controversy and ill feeling among others Gorkha Tribes like “Khambu ( Rai)”, “Gurung”, “Mangar”, “Newar”, “Khas (chhetri)”, “Baahun (Brahman)” and other tribes etc who followed same language culture and religious beliefs and all of them including “Tamangs” and “Limbus” come under “Bonbo” (worshipers of stones, river, trees, deities etc) and as such grave injustices have been done to these above other left out tribal communities.
This matter were already discussed in the 2nd round tripartite review meeting on Memorandum of Settlement of Darjeeling Gorkha Hill Council dated 28th Jan 2005 at Round Table Conference Hall of Union Home Ministry under the chairmanship of Shri Dhirendra Singh, Union Home Secretary at New Delhi.
I would, therefore on behalf of DGHC, request you to consider the above case for granting Scheduled Tribe status to all the members of the other left out Gorkha communities as a special case.

Sub: Pray for conversion into the Tribal Status of all the gorkha hill tribes as recognized by the then British Govt. of India in 1931

………………………………… Therefore, I would like to request you for taking the above matter seriously from the side of West Bengal Government and also request you to secure again the original tribal status to the above victimized tribal left out communities of DGHC areas, like ‘Khambu (Rai), [which includes Dhimal, Maajhi, Dewan (Yakha), Sunuwar (Mukhia), Gainay], Gurung, Mangar, Newar, Thami, Bahun, Khas [which includes Chetri, Thakuri, Gharti, Saneshi, Bhujel, (khawas), Jogi], Kami, Damai, Sark, Bedi, etc all of whom were already within the list of hill tribes, not only in the census of 1931 but also in the list of Darjeeling district gazetteer of 1947.