There is no official communication till date to the GNLF Party and its President Shri.Mann Ghishing regarding the announcement of appointing our President as Vice-Chairman of the North Bengal Board for Development of Sports and Games by Ms.Mamata Banarjee on 29-06-2016 from Siliguri.

When any Official Communication will be received from the concerned then the GNLF Party will convey a Central Committee Meeting to look into the pro and corns of the issue and discuss political implications of such announcement made by the CM and a decision would be taken keeping in view the larger interest of the people of Darjeeling Hills and the sentiments and voices of the party cadres. 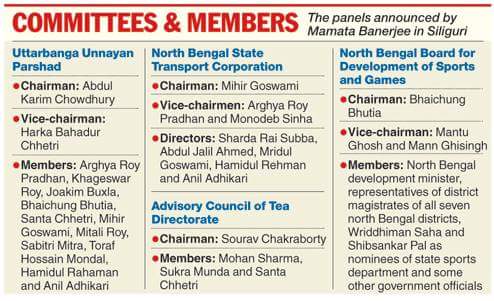 Mann Ghishing, the GNLF President believes that the "hand of friendship" or the goodwill gesture extended by the State Government is important for the all round development and progress of the Hill people and also for putting forward the various issues and demands of the GNLF but he, at the same time firmly believes that the "sentiment and wishes of the selfless caders" is of utmost importance and a priority above all.

For now it is just a wait and watch policy.