Mirik, May 29: From today, Mirik will be Trinamul's new signpost in the Darjeeling hills.
The party is expected to announce and implement a slew of schemes for the hill town and showcase Mirik before the hill people as the example of Mamata Banerjee's development agenda.

"So far, Bengal ministers and Trinamul leaders have highlighted the projects taken up by the state government in the hills. But from now onwards, the new civic board will implement projects in Mirik. The entire Mirik subdivision will witness comprehensive development. It is because of the mandate of Mirik residents that our party is tasting power in the hills," a Trinamul leader here said today, soon after the party's L.B. Rai was sworn in as the Mirik chairman.

He said Mirik would provide Trinamul with a launch-pad to penetrate the rest of the hills, especially before the coming polls to the GTA Sabha.

The Morcha will be under pressure to perform at the three other civic bodies in the hills. Morcha president Bimal Gurung had said after the civic poll results that people had given them "one last chance".

If the civic body in Mirik can establish that it is performing better than the three other boards, there will be more trouble for the Morcha.

Trinamul leader and minister Aroop Biswas affirmed that Rai and his colleagues would have a tough task at hand. "People here have huge expectations from Trinamul councillors and our party. It is obvious that they will have to perform and prove that the peoples' mandate was right. We will constantly monitor the civic body's functioning and extend all necessary help to them," Biswas said.

The hill town today wore a look of celebrations, with the flags of Trinamul and GNLF fluttering across Mirik. The six Trinamul councillors were taken to the municipality building in a bike rally organised by the party supporters.

Some of the councillors were riding pillion.

After the chairman and the vice-chairman were sworn in, the Trinamul supporters took out a procession in which the councillors and minister Biswas took part.

The march ended near Sumendu lake.

The three Morcha councillors left soon after they had taken oath and didn't wait to attend the first board meeting. 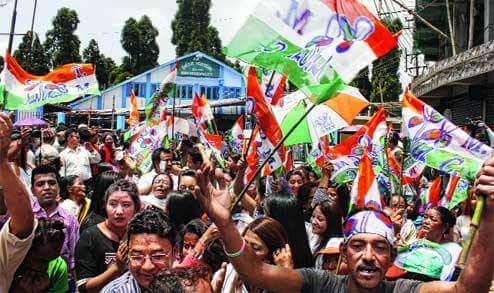