Home > West Bengal > If this is Democracy?

If this is Democracy?

India the world's largest democracy,the country we live and the country where democracy prevails in which power ultimately comes from the people. The rights of the individuals are protected and respected as per the Constitution of India.
But when it comes to our state so called West Bengal these democratic rights of the same individual are butchered everyday.. West Bengal government has its history of exercising hegemony among its minority community( Gorkhas); who they terms as outsiders or separatists..
Darjeeling the town which is carrying the its legacy as the 'Queen of the Hills' with its utmost beauty and peaceful endeavour has always come as a pride for Bengal. But when it comes to the people residing there Bengal has always taken a discriminatory stand since ages be it any ruling party forcing the indigenous people to raise their voice for Identity,Dignity and the separation from Bengal but the words are still unheard,unjustified and unfulfilled.
Under Article 19,the backbone of the chapter on Fundamental Rights or Personal Liberty it has guaranteed basic freedom to all citizens:
1) Freedom of speech and expression
2)assemble peacefully and without arms
3)form associations or union.

But today the Life,Liberty and Pursuit of Happiness for a Gorkha community has been cremated with the malign human right abuse committed against the people(most notably women and senior citizens)by the police authorities who were organising a peaceful rally in Darjeeling today..

Madam! You should know the success of a democracy depends largely on the the extent to which the civil liberties are enjoyed by the citizens in general.. But our civil liberty has been suppressed,hampered and butchered everyday by you,your authorities and by your state..
So hereby I resist the Democracy which you talks about that doesn't falls under the Constitution and which you practice in Our Hills everyday. Political equality is for all but not for the Gorkhas.. If it would have been for us we wouldn't need to beg for it... So I resist You,Your Democratic vision and Your Democratic Development.. 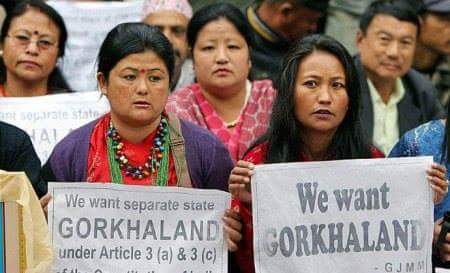