SHOCK and AWE: In Lathi-charge Police Sends a Message - 'Behave or We Will Make You'

The Mamata Banerjee government is focusing for the time being on two components in Darjeeling: collate actionable intelligence on the Gorkha Janmutki Morcha and send a message that law-keepers will not hesitate to use force to nip any attempt to disrupt peace in the hills.

The tactical objective is to stay ahead of the Morcha curve at any point of time and act with resolve whenever there is a need, said a senior police officer.

The rapid response was on display today at Chowk Bazaar, the commercial hub of Darjeeling, when a lathi-charge was launched to disperse protesters and a stone flew at the counter-insurgency force from a rooftop.

Led by officers deputed from Calcutta, a large number of police personnel swooped down and sanitised the area, going from bylane to bylane and chasing anyone spotted on rooftops. Rarely have the police responded in such a manner on a strike day in the hills.

Along with the show of force, the security establishment is working on three elements, the officer said.

First, draw up an area report about the pockets where the Morcha remains a formidable force.

Third, identify and ring-fence the possible targets where Morcha could strike to assert its presence.

On Monday, when most officers were busy with the deployment of the force outside government establishments, three senior officers visited Patlavas, the village where Gurung's house is located.

The house, around 4km from the Morcha's central party office on Lebong Cart Road in Darjeeling town, was locked.

While the police have details of the Morcha leadership, a drive is now on to gather as much information as possible on the second rung, including some councillors of the Darjeeling municipality.

A section of police officers feel these leaders hold considerable sway in their wards and can spring surprise attacks on different buildings.

"A list of possible target buildings that the Morcha would want to strike to send a strong message is being prepared," said a deputy superintendent of police in Darjeeling.

Central forces - six companies of the CRPF are deployed here - are working in close coordination with the state agencies. Senior officers of the central force, led by commandant Sunil Kumar Savita, have reportedly had several rounds of meetings with Darjeeling SP Akhilesh Chaturvedi.

"We are helping the state force here with every possible way," said Usha Kiran Kandulana, DIG (operations) of the CRPF, in Darjeeling.

The hill town today witnessed the display of force as a team of commandants from the state's counter-insurgency force took over Chowk Bazaar that wore a deserted look in the wake of a strike call by tea unions that was supported by the Morcha.

Around 11am, a rally demanding Gorkhaland had just ended and some women supporters were sitting on the main road with flags. When it appeared that more protesters may converge on the spot, the force wielded the baton to disperse the crowd.

Someone threw a stone from the top of a building. For the next hour, officers went about sanitising the area.

Jawed Shamim and S.N. Gupta, two officers who have been specially brought in, arrived with a huge force and started chasing anyone who could be spotted atop buildings.

From Chowk Bazaar, the force led by Shamim and Gupta reached Singmari, which has one of the most prominent Morcha offices in Darjeeling, and moved away the supporters who had gathered. Women RAF commandants were placed in front of a row of women Morcha supporters.

"This is the first time in a decade when the police reached Singmari on a day when the Morcha is holding a strike in Darjeeling," said Raj Sherpa, a resident. 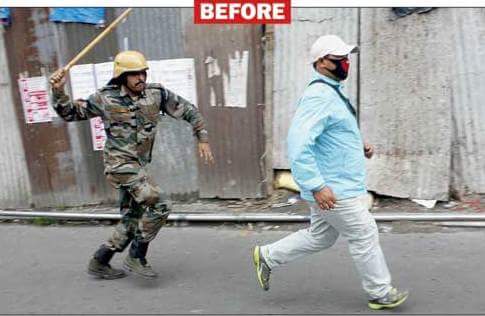