Darjeeling agitation: Why we Gorkhas feel deceived and dishonoured

The people's movement has once again been quashed by the government. Or is it our own leaders?

Hundred days are usually spoken of as milestones by political parties and new regimes – 100 days of the Modi government was a big cause for celebration. The first 100 days of the Mamata Banerjee government too didn’t go unnoticed in West Bengal. But when we touched the 100-mark in Darjeeling, there were no celebrations - because it was a shutdown. 104 days and 11 deaths later, we hear it’s been called off now.

News reports have been claiming that life is limping back to normalcy since yesterday, especially after the internet services resumed. Some even claimed that the weary residents are finally getting ready for Dasain, the biggest festival of the year in Darjeeling hills.

It’s true we are weary, but not because of the long agitation for Gorkhaland. After all that the people have witnessed and endured, now I am not even sure whether those 105 days should be called an “agitation”.

We have been staunch and silent for the past 105 days. The hardships that people like me faced were inconsiderable compared to those who earn their livelihood on a daily basis. Astonishingly, no one died of starvation. We have all survived. Everyone of us has had to fight this battle for survival at their own level.

But now it seems like we took a full circle and came back to where we started from. We now have Gorkhaland Territorial Administration-Part 2, as they call it, with Binay Tamang as its chief who has found renewed favour with the state government, and clearly the reasons don't have to be given in black and white. GJM chief Bimal Gurung has been on the run since day one of the agitation.

Weary we are indeed, of the deceive, the dishonour. Not for the first time though.

Gorkhaland has been and will always be dear to us. The generation before us was a part of it (the fight for Gokhaland), now we have been a part of it and our children too will surely partake in it. The voice for Gorkhaland has always found support and our leaders know it only too well.

On June 15, an indefinite strike was called by the GJM that was followed by sporadic instances of violence and arson. As I said, 11 people lost their lives. The demand for statehood was fuelled by the resistance that the people were facing from the state machinery.

For once it looked like we had shaken the very foundation of the state and the central governments. With a BJP government at the Centre -  a party which has always heralded the creation of new states - we were positive that our demands would be met. The strike continued and we made it a way of life. It was never easy though having to compromise with basic necessities and the luxuries of our daily lives that would normally go unnoticed.

As the days went by laboriously, we were only made to realise how futile it has all been. How meaningless those struggles turned out to be. How for days people went about their lives amid the shutdown. How women in the neighbourhood hopped on to the hospital ambulance to reach their offices, how housewives made sure not to miss the demonstrations even amid the police crackdown. We did all that and much more for Gokhaland.

But the leaders on whom we had invested our faith were only too "confused". Apparently, they had no idea who they needed to address their problems to.

As foreseen, the state pounced on the first given opportunity which brought GJM’s Binay Tamang to the fore. He came as a “messiah” claiming to rescue us. He called off the strike till September 12, which started another agitation.

GJM supremo Bimal Gurung announced from his undisclosed location that the strikes will continue and there was no question of suspending it at any cost. He even removed Tamang from his party post of convener.

We were confused what was happening within the GJM. A few days later, Tamang and Anit Thapa were made the chairman and vice-chairman of a nine-member “board of administrators” to run the GTA. (All 45 elected members of GTA, including its chief executive Bimal Gurung, had resigned from the administrative body in June.)

Two days back (on Tuesday, September 26), Bimal Gurung decided and announced to call off the indefinite strike. It was also announced the decision was taken after Union home minister Rajnath Singh’s appeal to him.

Back home, we couldn't have been more surprised.

Would we now support the leader, who claims to be in the jungles, and who we have not seen since the agitation found ground? Or would we go with the one who says he will help us get rid of all disgruntlements?

I don't know which one of them will emerge a bigger "hero". But I do know that for now Bimal Gurung is still that hero. Confused and lost he may be, but we still uphold his dominion.

The people's movement has once again been quashed by the state government. Or is it our own leaders?

We want Gorkhaland and so we tried to keep the agitation alive. Lives have been lost and legacies been inherited, but Gorkhaland has remained ever so elusive. 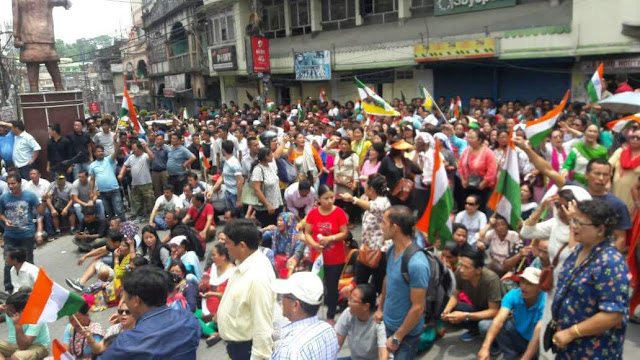