Making a strong pitch in Darjeeling for peace in the Hills, West Bengal chief minister Mamata Banerjee urged the Centre on Tuesday “not to assist anyone” bent on sundering the region “into tiny bits” for minor electoral gain.

“I want friendship... but won’t allow Darjeeling (the Hills) to be reduced to bits”, Mamata stated, obliquely cautioning Gorkha Janmukti Morcha leader Bimal Gurung, who enjoys the support of the BJP. Turning to another section of the Hill leadership, she added:  “We have a duty to see that there should be no more violence”. 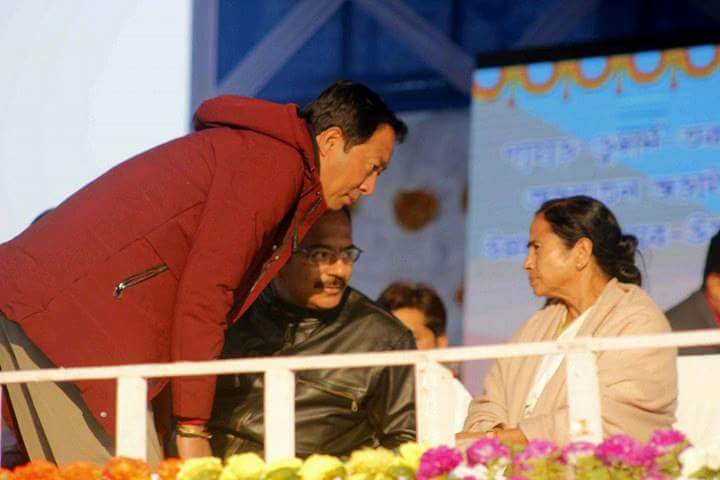 Banerjee’s flak was directed at both the Centre and Gurung, the latter being the chief architect of the demand for a separate state and against whom her administration slapped charges in connection with his alleged role in the violence in the region during last year’s June-September shutdown in support of Gorkhaland. It is with his support that the BJP hopes to retain the Darjeeling seat in the next parliamentary elections.

Only two days ago the Hills were agog over an allegation by the police that Gurung had been preparing for insurgency to attain statehood and overseeing a clandestine armed training camp only a few kilometres from Darjeeling town. The recovery of a large cache of arms might have been viewed as a major breakthrough by security intelligence, but it also underlined the volatility in the local political environment despite the overall calm.

Inaugurating the two-day Hill Business Summit — the much-vaunted, first-ever meet in the hills of industrialists with the purpose of exploring investment opportunities in the region — Mamata, in an unequivocal message to the local political leadership and the people of the region, said: “You give us peace, we (her government) will give you prosperity. This is our commitment... For this somebody has to bell the cat; let me bell the cat”. She also assured an initial investment of Rs 100 crore from her government for “promotional development” in Darjeeling and the rest of the north Bengal.

Addressing the Hill leaders on the dais, some of whom have contradicting viewpoints on certain political issues, Mamata said: “Please see that there should not be any more violence... Some political leader can gain (by indulging in it) but the Darjeeling people will not gain”. If they had any “problem” she was open to “discussions”, she added. And, in a bid to rebuff her detractors, she said she would not be coming “to seek votes”.

This followed an assurance from Binay Tamang, handpicked by her as chairman of the board of administrators for the Gorkhaland Territorial Administration (GTA) that “Darjeeling and Kalimpong (districts) will be a strike-free zone and there will be no political disturbances in the Hills anymore”. It had suffered enough in the past, Tamang pointed out.

Underscoring the need to diversify the Hill economy beyond its main bulwark, tea and tourism, Mamata said that the youth of the region needed greater “employment opportunities” which can only come with more industries. “I believe investment is ready but first we need to safeguard peace”, Mamata asserted.

There can be little doubt that the summit is as much an exercise to draw much-needed investment to bolster the Hill economy and an assertion of the control the ruling political dispensation — purportedly propped up by the state government — enjoys in a region where anxieties over its political future refuse to go away. The concerns linger despite the return of the usual signs of normality after months of unrest last year.  The fractious Hill political leadership does not help matters.

It is in such a situation that the optics of holding the conclave — at a time when there appears to be a re-structuring of the local political space — is hard to miss, no matter what might be the future business-related returns. Clearly, the imagery is designed to allay security concerns among prospective investors and to send the message that an atmosphere congenial to business has been restored in the Hills.

It bears recalling that the summit was initially scheduled for the tail end of last year in the course of an on-going tourism festival following the realisation that not only would it not be able to draw a sufficient number of prospective investors, but also, and more importantly, the security situation was not adequately amenable to risk a visit by Mamata.  The smouldering fires her visit stoked in June 2017 might have died down but, even then, a chance could not be taken. So the much-hyped industrialists’ meet had to wait. Until now.

The question confronting industrialists who might be considering setting their sights on the Hills is this: How stable is the political situation in a region whose local economy has been at the receiving end because of intermittent strikes? (some of which are prolonged and punctuated by bouts of violence). Particularly so since the agitation to press for a separate state began in the mid-1980s. Often, state authorities, who view the movement largely through the security prism, have had to resort to robust methods to crackdown on the agitators; but the demand simmers, and the threat of disruptions refuses to go away.