Parliament on Monday passed a stringent legislation prescribing death penalty to those convicted of raping girls below the age of 12 years and making the law against such sexual offences harsher. The Bill replaces the Criminal Law (Amendment) Ordinance promulgated on April 21, following an outcry over the rape and murder of a minor girl in Kathua in Jammu and Kashmir and the rape of another woman at Unnao in Uttar Pradesh. 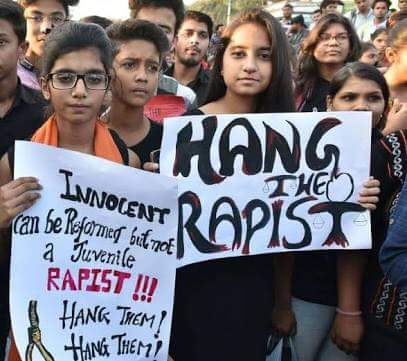 The Criminal Law (Amendment) Bill 2018, which was passed in the Lok Sabha on July 30, was approved by a voice vote in the Upper House.

While replying to a debate in the Rajya Sabha, Minister of State for Home Affairs Kiren Rijiju assured the House that the concerns and issues raised by the members would be looked into by the government, even as he did not agree with the demand of several MPs to send the bill to a Select Committee for scrutiny.

Terming the bill as one of national importance, Rijiju said the law is aimed at providing safety to minor girls as he highlighted various aspects of the measure.

He said the government brought the bill, as in the last few months, several heart-rending incidents of rape of under- aged girls have taken place in the country.

Rijiju said four states had already brought a law in their respective assemblies for capital punishement those who commit rape gainst the girl child who are under the age of 12. The states are Madhya Pradesh, Rajasthan, Haryana and Arunachal Pradesh.

"We have introduced certain changes in the Indian Penal Code, Criminal Court Procedure, Evidence Act and there are consequential effects on prevention of atrocities against children," the minister said.

The bill stipulates stringent punishment for perpetrators of rape, particularly of girls below 12 years. Death sentence has been provided for rapists of girls under 12 years.

The minimum punishment in cases of rape of women has been increased from rigorous imprisonment of seven years to 10 years.

According to the bill, in case of rape of a girl under 16 years, the minimum punishment has been increased from 10 to 20 years, extendable to imprisonment for rest of life, which means jail term till the convict's "natural life".

The measure also provides for speedy investigations and trial. The time limit for investigation of all cases of rape has been prescribed, which has to be mandatorily completed within two months.

The deadline for the completion of trial in all rape cases will be two months. A six-month time limit for the disposal of appeals in rape cases has also been prescribed, the bill says, adding that there will also be no provision for anticipatory bail for a person accused of rape or gangrape of a girl under 16 years.

Participating in the debate, several members made a case for sending the bill for scrutiny to Select Committee, saying there were several shortcomings in it.

Some members argued that the provision of death penalty could affect reporting of cases of sexual assault as in many cases the accused happened to be relatives or known persons.

There was also an opinion that the provision of death penalty could endanger the life of the victim.

Many members suggested that the government change the term 'woman' in the bill appropriately and make it gender- neutral as such crimes do happen with boys as well.

Sukhendu Sekhar Ray (TMC) wondered why there are different punishment according to the age of the vicitm. He also expressed concern over the large pendency of cases in courts in the country.

Manoj Kumar Jha (RJD) expressed concern that provision of death penalty may endanger victim's life, while Kahkashan Perween (JD-U) suggested that like in Bihar, there should be women police stations in all states.

Chhaya Verma (Cong) said punishment should be the same for those convicted for rape, irrespective of the gender of child victim.

Ravi Prakash Verma (SP) said the bill should be sent to a select commitee as it took care only of girls and not boys. Citing a survey, he added that the cases of sexual violence were more against boys. Rajeev Gowda (Congress) also aked the government refer it to a select committee.