Darjeeling Likely to Witness Another Agitation

11:46 AM
•
gjm
Darjeeling Likely to Witness Another Agitation From May 1

In an interview given to the Himalayan Beacon, published on Tuesday, CITU has declared that they would be launching an agitation for the workers of Darjeeling, Terai and Duars from May 1. The agitation, however, will mostly focus on the demands of the tea garden and hotel workers. This can be perceived as an affront to the Darjeeling-based Binay Tamang-Anit Thapa faction of the Gorkha Janmukti Morcha (GJM). This faction had earlier declared that the hills will not witness any more strikes. However, the workers’ agitation will most probably be too prickly for the faction to handle, considering that they form the core base of voters in the hills.

Tea gardens are not one of the Scheduled Employments in West Bengal under the Minimum Wages Act. The issue of the tea garden workers began in 2014 when they had agitated to be brought under the Minimum Wages Act. In 2015, a tripartite agreement was signed between the workers’ unions, the owners’ union and the West Bengal Government. The agreement stipulated a gradual increase in the minimum wage over a period of three years. In 2017 another meeting was called to revise the minimum wages agreed to in 2015, other than the Trinamool Congress affiliated unions, all the others stayed away in protest against the move. CITU in the interview has alleged that three years since the first agreement was signed, the workers are yet to receive the agreed minimum wages. This also ties into their demand that the ration money owed to workers be paid. As a result, they demand that the entire amount owed to the workers be paid, and that tea gardens also come under the Act. 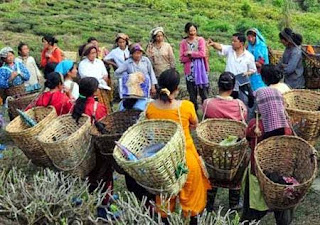 The issue of land rights is another sore point. According to the CITU representative, the provisions of The Scheduled Tribes and Other Traditional Forest Dwellers (Recognition of Forest Rights) Act, 2006, has not been extended to the tea garden workers. When the tea gardens were first established in Darjeeling, the colonial planters had secured large areas of forest which they converted into plantations. However, not all the area claimed by the gardens has been cleared. It is in these forested parts where the workers have established their homes. Thus generations of tea garden workers have lived on these lands. On this basis, after the 2006 Act came into force, the workers were entitled to hold title over the land on which they live.

The issues highlighted by the CITU representative for the hospitality industry workers focused on; wages for the period of the 2017 agitation, that benefits such as gratuity, provident fund, employees state insurance, and health insurance be extended to them and that they should be able to avail leave on government holidays. Here too, they had launched a movement in 2015, seeking that minimum wages be fixed based on the type ofestablishment – a small restaurant would pay less than a five-star hotel. The movement resulted in a bipartite agreement with the hotel owners’ association. However, the agreement has yet to be implemented. In this regard, the CITU representative has declared expanded demands for the hospitality industry workers.

The CITU representative also mentioned that though the agitation at present is focused on the plight of the tea garden and hospitality industry workers, the agitation would be for the rights of all the workers in the region. He specifically mentioned the hospital staff, construction workers and migrant workers in this regard. He also stated that the unions had submitted memorandums to the concerned owners and that the memorandums contained an ultimatum that unless their demands are met, they would launch an agitation from May 1 till the end of July. This point is significant since the agitation would cripple the tourism industry.

The Binay Tamang – Anit Thapa faction of the GJM has stated that they are pro-business and would not allow any agitations or strikes in the hills. However, they appear to have forgotten the origins of the GJM’s founder, Bimal Gurung. Gurung came from a family of tea garden workers. His residence and the nucleus of the GJM’s power lay in Patleybas, a notoriously poor and rough neighbourhood on the fringes of Darjeeling. One of Gurung’s most popular moves among the tea garden workers in the Darjeeling hills was in 2011 when he was able to secure a raise in their wages. Prior to his intervention, the workers were getting Rs. 67 per day, he was, however, able to raise it to Rs. 90. This worked out as an increase of around 34 percent. At present, the agitation that has been threatened seeks to raise this wage further.

Chances are that the Binay Tamang-Anit Thapa faction will intervene at least in the hills to prevent the agitation from taking place. In the Dooars and Terai, the Bimal Gurung faction still holds sway, it is unlikely that they would miss an opportunity to bring their rival faction down a peg. If the matter is not resolved by May 1, Darjeeling will lose another year of tourism revenue. However, this clearly appears to be a gamble the workers are willing to risk
READ MORE

NARI MORCHA PROTESTS AGAINST NATIONAL COMMISSION OF WOMEN IN DARJEELING

Rekha Sharma, the chairperson of National Commission for Women, is in Darjeeling hills for three days to examine allegations of violation of women's rights and police atrocities during the statehood agitation last year.

National Commission for Women has scheduled to visit Kurseong, Mirik and meet common people, including some of the complainants. Commission has also scheduled to visit jails and conduct an inquiry into police atrocities and examine cases where women have been named as accused and are behind bars. Recently, a Darjeeling resident had accused a police officer of threatening to torture women members of his family, following which a complaint was sent to the commission.

Meanwhile, Nari Morcha (GJMM women wing) supporters have protested the visit of National Commission of Women in Darjeeling today as their visit to Darjeeling at present may disturb the current situation. 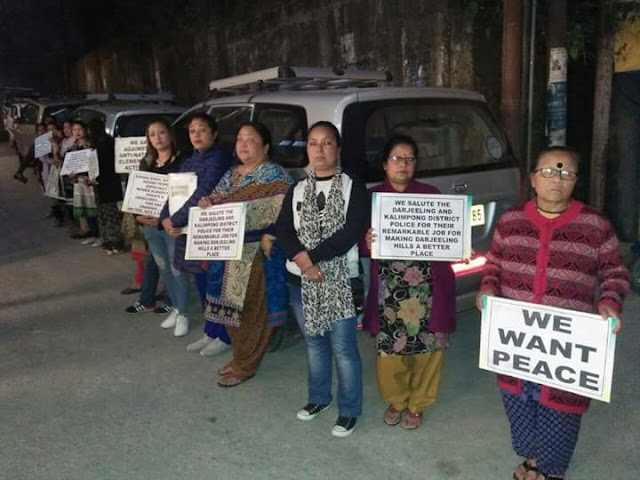 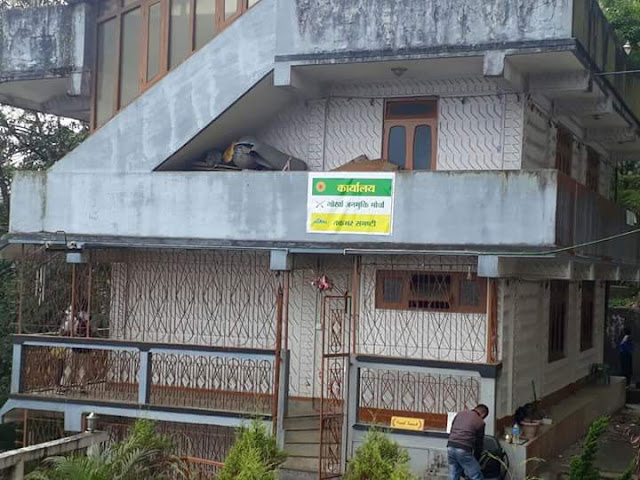 GJM to support TMC in Dooars

Darjeeling: In a major setback for the BJP, the Gorkha Janmukti Morcha (GJM) on Thursday announced its decision to forge an alliance with the Trinamool Congress in the forthcoming Panchayat elections, in Jalpaiguri and Alipurduar districts. This comes on the heels of Kamtapur Progressive Party (KPP) also throwing its weight behind the TMC in Dooars for the rural polls. The day saw a core committee and working committee meeting of GJM at Bagrakote in Jalpaiguri, from where this new political equation has emerged.

"We have decided to forge an alliance with the TMC in the two districts of Dooars for the rural polls. We will support TMC candidates in some Panchayats and in our strongholds, we will field independent candidates. A four-member GJM team will be visiting Dooars soon, to negotiate with TMC on seat sharing," stated Suraj Sharma, GJM Spokesperson. GJM top brass, including president Binay Tamang, was present in the meeting. When questioned on why the GJM decided to leave the BJP fold, Sharma stated: "BJP has let down the Gorkhas. There arenumerous instances of this. They have never been serious about the Gorkhas and have just used us for securing seats during elections."

He further stated that while the BJP-led Union government had called for a report within 3 hours of the recent Ranigunj strife, it remained a mere spectator during the 2017 unrest in Darjeeling and the 104-day-long bandh. "Whereas Mamata Banerjee has helped restore peace and normalcy in the Hills. We want Dooars to benefit also," added Sharma. The GJM has strongholds in several areas of Dooars. 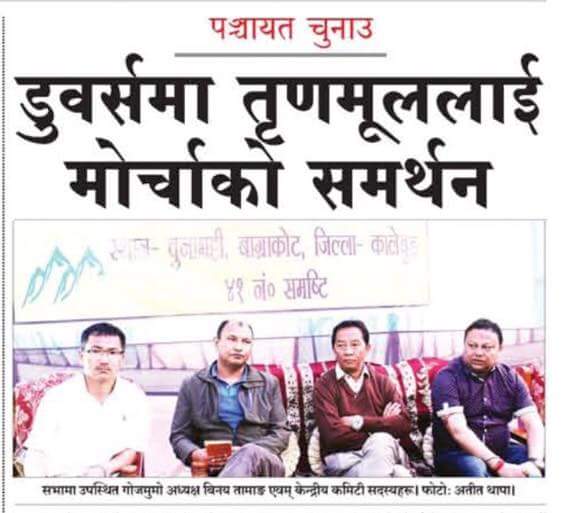 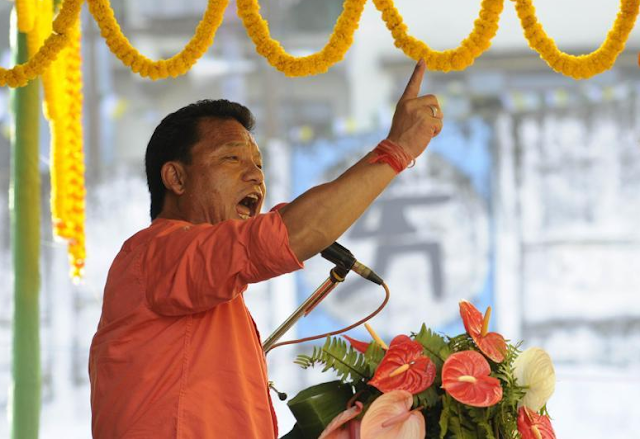 8:09 PM
•
West Bengal
Bimal Gurung and many Gorkhas in the hills have been sent show cause notice in connection with their absence from their home region. It is to be noted that Bimal Gurung, Roshan Giri and several others have serious cases sub judicial slapped by the Bengal Government and many GJMM leaders and workers are already behind the bars.

“Keeping GTA election and 2019 election in mind, this is being done since, Mamata Banerjee and her sycophants are aware that if Bimal or his men contests, they will be victorious by huge margin. She wants to ensure they never return to the region so, that she could rule the hills” said a social worker on the condition anonymity. 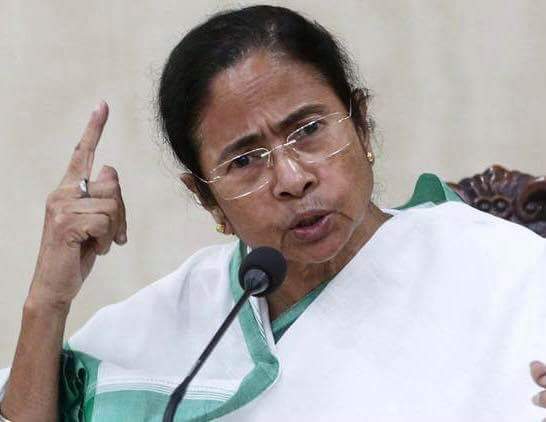 Some also fear that West Bengal government wants to label Gorkhas as foreigners and this is a start from the top. “It’s a well known history that if a king is captured, you win the war. She is trying to do the same as Daju is the undisputed Gorkha hero as of today. By making him dysfunctional and immaterial she wants to uproot our community and rule the whole region” said Robin Chhetri from New Delhi.

It is believed that fearing BJP rise in West Bengal, TMC had masterminded the whole plan of Bengali language implementation in the hills along with other parts of the state. She was aware that it will lead to a huge protest and unrest in Darjeeling hills, Terai and Dooars and, thus she could create an emmergency like situation in the hills and use state machinery to take control of it. With state police openly threatening to shoot out Bimal Gurung, intentions were evident.  It could be a conspiracy to polarise Bengali community votes towards TMC and at the same time take over hills for good.

Hundreds of thousands of North Bengal Gorkhas live in other parts of the country and internationally to make their living. Scarcity of opportunities to work in Darjeeling hills, Terai & Dooars has forced people to move to other cities for employment. “Many comeback during elections to vote. Why should their names be removed from voters list. Bengalis also are present in various part of the country hailing from West Bengal. Are they sent such notices too” asked a furious father whose son works in Hyderabad.

“On one hand she wants all Bangladesi citizens living in India over just 5 years to be deemed Indian citizens and also has soft corners for Rohingya people but, on the other hand she wants Gorkhas who came with land and live here for centuries to be labelled as foreigners. This is hypocrisy and dirty politics” said an angry businessmen from Siliguri. 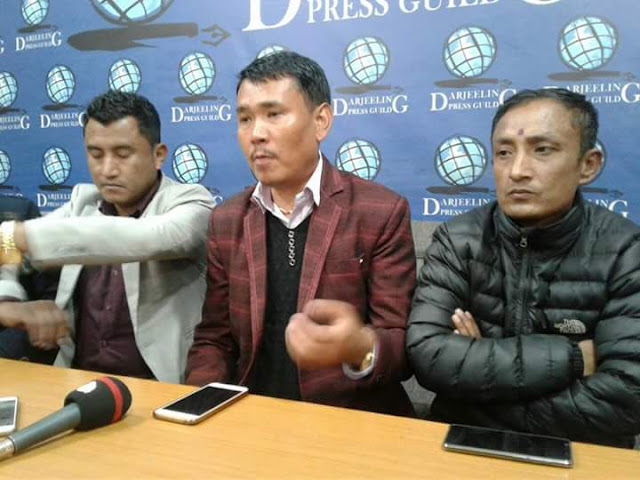 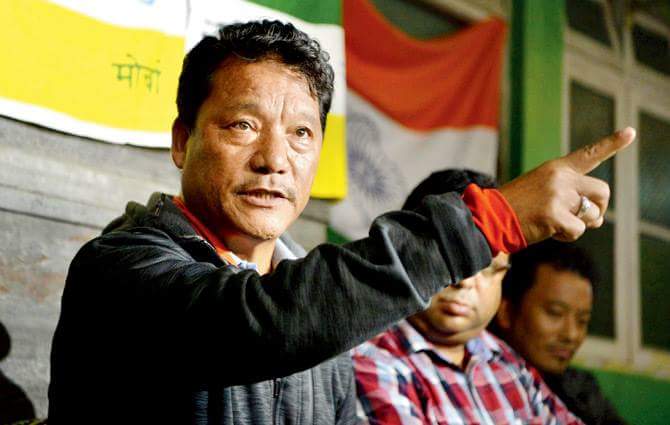