So here’s what we know about the Benares in which director Manish Tewari sets Issaq. There are more staircases in the city than there are mosquitoes in Kolkata. Its men spit compulsively and everywhere. Wiry old sadhus have elaborate chemistry labs with test tubes, beakers and flasks in their backyards. These sadhus can outdo Pooja Bedi with their sex-life advice, and they levitate with the same ease with which an average Indian man burps or scratches his crotch. Benares is also under grave threat from the Maoists who, being as imaginative as the film’s director, aren’t so pedestrian as to behave like real-life Maoists; they smuggle sand. 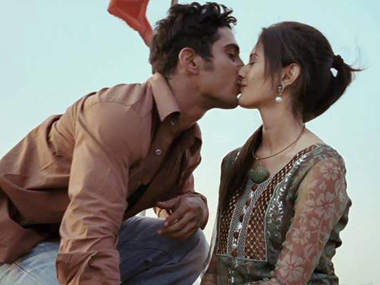 Background set, let’s move on to the story of the film. No spoilers here, just what the director has said already said — Issaq is an adaptation of Shakespeare’s much-adapted Romeo and Juliet. The counterparts of Capulet and Montagues are Kashyap and Mishra. (If you missed this stunning usage of alliteration here, you should probably never watch a Bollywood film ever again.)

The Kashyaps have a girl, Bachchi. The Mishras’ boy is called Rahul. Rahul, played by Prateik, is your average small-town lover boy who struggles to speak in English and hits on anything that has breasts. The only redeeming quality about our soon-to-be Romeo are those bronzed, toned biceps, tailor-made for banian commercials. Bachchi, played by newcomer Amyra Dastur, is a pretty girl who looks inexplicably pleased throughout the film.

The duo meet at Benares’ counterpart of a masque ball: Holi party. At this party, Rahul drinks bhang and stares into the camera creepily. Bachchi, on the other hand, reveals her inner rebel by wearing a pair of horns alongside her salwar kameez and stoically waist-jerks to the music of dhol. I hope feminist hearts are bursting with joy at the mere thought of this uplifting demonstration of girl power. Drunk boy sneaks up to girl in prayer room and kisses her. This, ladies and gentlemen, is romantic. Because there’s nothing even mildly disturbing about an inebriated man forcibly kissing an unknown girl after barging into her house, right? All’s fair in love and war in Benares. Haven’t you seen Raanjhanaa?

Then we meet the villains: the aforementioned sand-smuggling Maoists led by one Tamil man called ‘Madrasi’, a red-eyed, perennially-grumbling evil mama played by Ravi Kissen, a stepmom (Rajyashree Badola) and a fair, chubby-cheeked policeman call Prithvi. The Kashyaps and the Mishras are in the business of capturing Benares’s ghats. They are also in the extremely profitable business of sand smuggling. How does sand smuggling work? SUV-filled goons drive on to endless stretches of sand and camp there, taking truck-full of sand and silt away. Given how prolific these men are shown to be in Issaq, you’d imagine Benares to be a desert of Thar’s proportions. Anyway, so this squabbling over who gets to smuggle more mud/sand make the families sworn enemies.

The families are outraged, the sand smuggling Maoist is out for a kill and the policeman wants the girl. The least absurd thing that happens in the rest of the film is when a young Maoist shoots a bunch of policemen, chanting he wants Katrina Kaif.

We’re not yet sure what Prateik’s talents are as an actor except denouncing surnames. And the most memorable role he has played till date was only second in importance to Genelia D’Souza’s hair clips in Jaane Tu Yaa Jaane Naa. In Issaq, Prateik mistakes himself to be in a Nike commercial. He runs in more languid slo-mo than Kajol in “Tujhe Dekha Toh Yeh Jaana Sanam” and he jumps over more rooftops than Akshay Kumar has for Thumbs Up. And then there’s his dialogue delivery, which is a scary reminder of how Katrina Kaif mangled lines in Boom. Not much is required of our Juliet. Dastur looks facewash-ad fresh and pretty. She wears a whole bunch of nice kurtis throughout the film. Brownie points to her for that.

One wonders, however, what is a greater tragedy — Romeo and Juliet or what Issaq made of that classic love story.