As of Wednesday, 78-year-old Terry Hutt had slept outside St. Mary’s Hospital for seven nights. He has been photographed in his Union Jack T-shirt, shorts and hat, under his Union Jack umbrella, holding handmade signs. He is participating in the #GreatKateWait, anticipating the arrival of Britain’s next prince or princess (if more enthusiastically than most). 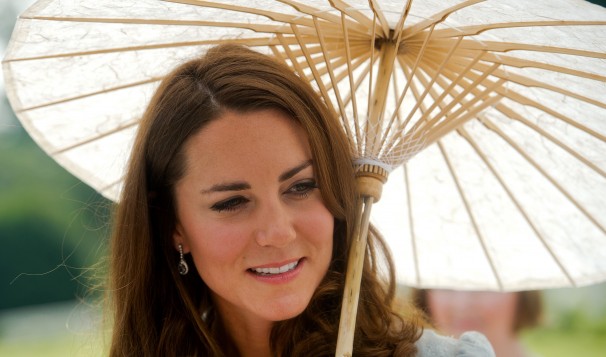 Those of us not stalk- . . . er, staring in person at the maternity ward of the London hospital designated to deliver the first child of the Duke and Duchess of Cambridge — better known as Prince William and Kate Middleton — have relied on the media circus outside, which has produced such voyeuristic aids as the Sun’s Royal Baby Monitor, a live stream of “all the comings and goings into and out of the Lindo Wing,” and Web and phone apps that combine live updates with royal and Middleton family histories.

The weeks-long Royal Baby Watch, punctuated by speculation that the duchess has in fact gone into labor or will be sneaked into another hospital, has engaged even the most eminent of relatives. In response to a child’s question this week about whether she preferred a great-grandson or great-granddaughter, Queen Elizabeth II remarked: “I don’t think I mind.” Then the sovereign noted: “I would very much like it to arrive. I’m going on holiday. No sign yet.”

Kate Middleton is giving birth to a future British monarch.

We love her for this.

We love her for everything — even if we don’t always think about why.

During William and Kate’s years-long courtship, media coverage of the couple included intense speculation that Kate, a commoner by birth, might not have been a suitable partner for the future king. For Americans, it is easy to view the couple’s narrative in fairy-tale terms: Ordinary girl marries tall, handsome prince, leveling society’s class system. This makes sense when one gets to appreciate the monarchy’s pomp, circumstance and bling without any of its expense or constitutional details.

But that story line is not quite right. Kate might not have been aristocracy, but neither was she the typical girl next door. The daughter of self-made millionaires, she had flexible hours working for her parents’ party-supply business, or not working, which allowed her to focus her life around her prince. And William and Kate’s popularity ensures the continuation of the monarchy — reinforcing, not eliminating, Britain’s class system.

Kate and William radiate an ordinariness that endears them and the monarchy to their future subjects. He grew up standing in line at amusement parks and McDonald’s because his mother, Diana, the late Princess of Wales, wanted him to understand life beyond the palace walls. His wife is the first future queen to consistently shop off the rack, enabling copy-Kates the world over to emulate her style. They go to movies and meals out — all of which makes them feel accessible, in the tradition of Diana, the “people’s princess.” We feel welcome to continue calling her Kate, despite all the palace fuss about Catherine, the Duchess of Cambridge. Even the publication of nude photos of the duchess last fall — the sort of scandal that blacklisted a royal just a generation ago — sparked more sympathy for the couple than criticism.

There are signs of modernization: After the “wedding of the century” in 2011, Britain and the commonwealth countries updated their laws of succession, which had favored male heirs. Whatever the baby’s gender, the first Prince or Princess of Cambridge will be third in line to the throne (bumping Uncle Prince Harry down to fourth). The baby’s birth will be announced on Twitter and posted on a gilded easel at the Buckingham Palace gates.

But for all the talk of William and Kate as modern young royals, they have clearly fallen into step with centuries-old traditions. Kate might have allegedly joked while they were dating that the prince was lucky to be going out with her. But she has embraced an extremely traditional role, with her life largely defined by her marriage, man and family. She is a happy homemaker, shopping for groceries, cooking dinner and reportedly even making her own jam, which she gives out as gifts. She has taken to royal life with aplomb, rarely putting a (perfectly shod) foot wrong, even in the glare of unprecedented media coverage. It is a supporting role in which she is seen and rarely heard.

On a certain level, the #GreatKateWait is the product of a popular illusion. Dazzled by a beautiful couple, people see youth and presume fresh thinking and 21st-century mores. But this is not a modern partnership of equals. People may toast the next generation — more than $90 million is forecast to be spent on alcohol alone as part of royal baby celebrations — but underneath the glamour, William and Kate’s relationship is as traditional as the monarchy he is destined to lead.