Australia great Shane Warne was inducted into the International Cricket Council (ICC) Hall of Fame at Lord's on Friday. 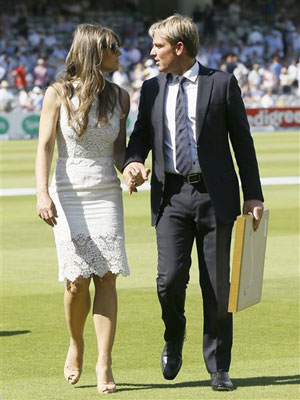 The leg-spin legend received the honour during the tea interval of the second day of the second Ashes Test between England and Australia.

Warne, credited with reviving interest in leg-spin outside Asia, was the first bowler to take 700 Test wickets and represented Australia in 145 Tests between 1992 and 2007. In all he took 708 Test wickets at an average of 25.41.

Warne also took 293 wickets in 194 one-day internationals at an average of 25.73 and was a member of the Australia side that beat Pakistan in the 1999 World Cup final at Lord's where his team-mates included fellow Hall of Famers Glenn McGrath and Steve Waugh.

His return in the final of four wickets for 33 runs in nine overs saw Warne named man-of-the-match.

"I'm very honoured and proud to be inducted into the ICC Cricket Hall of Fame today and I thank the voting academy very much for even considering me," Warne said Friday.

"Many of the Hall of Fame members were my heroes when I was growing up, including the likes of Ian Chappell and Dennis Lillee.

"I am delighted that I am celebrating my induction with my friends and family in front of the crowd at Lord's during the second Ashes Test.

"I was very lucky to play in a wonderful era of Australian cricket and make so many friends along my 20 year journey. I hope I kept everyone entertained and on the edge of their seat when they watched the Australian cricket team play."

Seeing Warne was a reminder of happier times for many Australian fans in a capacity Lord's crowd of over 28,000 as they watched Michael Clarke's men collapse to 128 all out, a first innings deficit of 233.

Warne is the 69th male member of the Hall of Fame and the 18th from Australia.