It was not exactly 624 but Kumar Sangakkara's career-best had a similar effect as the 2006 record stand he put on with Mahela Jawaywardene against the same opposition seven years ago. Sangakkara's 169 was his 16th ODI century, the highest score by a Sri Lankan batsman at home, which sent him past Ian Bell as the second highest run-scorer in ODIs this year and took his 2013 average to 75.55. It was also the difference between the two sides at the Premadasa Stadium. 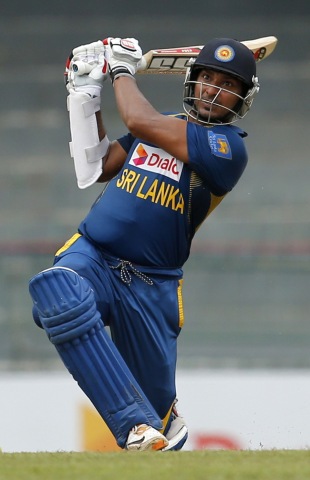 Sangakkara dominated the South African attack with unusual aggression. He built his innings to a crescendo, scoring 66 runs off the first 91 balls and 103 from the next 46 and bulleted the leg side with boundaries. Almost 78% of his runs - 131 - came on the on side.

He made all South African bowlers - from their seamers who persisted with the short ball to their sitting duck trio of spinners - appear ineffectual and set their batsmen a target that would require them to complete the highest successful chase at the ground. That set Sri Lanka up to subject South Africa to their second-biggest loss and begin Russell Domingo's tenure on a difficult note.

South Africa went into the fixture understaffed, with Lonwabo Tsotsobe unfit for selection and Hashim Amla missing out because of an overnight neck problem. But they also seemed underprepared despite a week of training on the island.

Morne Morkel and Chris Morris bowled 19 deliveries between them in the first two overs because of the seven wides they sent down. To add insult to that ill-discipline, Morkel had Upul Tharanga dropped on nought by Alviro Petersen in the first over after the quick changed angles to round the wicket as he tried to find his line.

Morris discovered his soon after and bowled Tillakaratne Dilshan for 10 but Tharanga was there to remind South Africa what an error can cost. He took advantage of any width and put on 70 with Sangakkara before inside edging onto his stumps off Morkel.

Sangakkara and Jayawardene evoked even more memories of 2006 in their stint at the crease together. In their 74-run stand, Jayawardene dispatched the short ball at will while Sangakkara dealt with the spinners. Jayawardene succumbed to the pull but left Sangakkara to inflict the bulk of the damage.

Sangakkara imposed his authority in the latter third of the innings. Lahiru Thirimanne scored just 17 runs in a 123-run stand with Sangakkara, who hit audacious shots like the scoop and had some fortune with his edges. Already on a magical run this year, Sangakkara took that to new heights against an attack that ran out of ideas.

Thisara Perera's cameo at the end allowed Sri Lanka to take 103 runs off the last 10 overs and saw Sri Lanka post a total South Africa were never in with a chance of chasing.

Colin Ingram, opening in place of Amla, was out for a golden duck as his defences were absent against a perfect, inswinging Lasith Malinga yorker. Duminy, who was in a new role at No. 3 and playing his 100th ODI, dealt with Malinga better and hit him for two fours in the fifth over. Just as he looked good, he outside edged off Shaminda Eranga and Sangakkara reacted outstandingly to take a one-handed catch, low down.

Petersen showed why he should be considered in the openers' role more permanently with a watchful knock. Along with AB de Villiers, who was dropped by Eranga off his own bowling on 4, he made a South African challenge seem possible. De Villiers drove well and looked comfortable until Rangana Herath was brought on.

Sri Lanka's go-to man produced a delivery that angled into de VIlliers and bowled him as he played inside the line. Petersen, who was joint top-scorer on 29, was caught behind in the next over and at 75 for 4, it was only a matter of time.

South Africa's last six wickets fell for 58 runs as the middle order lacked temperament and application. That only served to worsen their record: South Africa have not won an ODI against Sri Lanka in Sri Lanka since 1993 and have won only one of the 11 completed matches against the hosts they have played there. They will question their flawed strategy, especially in the spin department as they played two left-arm spinners against a top five with three left-handed batsmen and two sublime players of spin, who made them pay today.