HYDERABAD: As the Congress high command is bracing up for the 'final call' on the Telangana issue, minorities in AP are anxiously figuring out what their future would be if the state is bifurcated. They do not have apprehensions if AP remains intact. But, in the event of separate Telangana being formed, their concerns about security and economic and social well-being need to be addressed, more so because smaller states tend to marginalize the minorities since economic and livelihood opportunities are limited and these are grabbed by the majority. 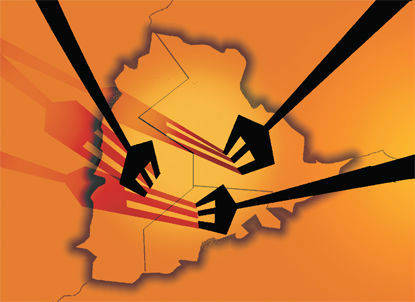 The minorities, particularly Muslims, are wary of getting marginalized further in both the new states if AP is split. Apprehensions are more pronounced in Telangana and Rayalaseema regions where Muslims are relatively more backward than other backward classes and even the scheduled castes and scheduled tribes. In coastal Andhra region, the minorities live in slightly better socio-economic conditions. The baggage of history also places Muslims in Telangana in a disadvantageous position vis-a-vis their counterparts in Seemandhra since they face sustained campaign against them by the right-wing forces of the majority community.

During the last stages of Qutub Shahi rule and early era of the Nizams' reign, the present-day Andhra Pradesh was a unified kingdom straddling parts of three distinct linguistic regions. The Nizams ceded Rayalaseema districts as well as the northern and southern Circar districts to the British around 1798-1802. Muslims in these two regions came under Madras Presidency during British rule and composite Madras state after Independence. Their counterparts in Hyderabad dominions lived under the Nizams and later Hyderabad State after the Police Action in September 1948.

The formation of separate Andhra with the bifurcation of Composite Madras State in 1953 brought Muslims in Rayalaseema and Coastal Andhra under a new dispensation. Muslims in erstwhile Nizam's dominions bore the brunt of the fall-out of Police Action, particularly in Marathwada, Hyderabad-Karnatak and northern Telangana regions. Even as things were limping back to normalcy in Hyderabad state, the Union government took up the exercise of states reorganization on linguistic basis in 1956. Old Hyderabad state was trifurcated, with Marathwada region tagged on to Bombay state and Hyderabad-Karnataka region to Mysore state. The Telugu and Urdu-speaking Telangana region was merged with Andhra state to form Andhra Pradesh on 1st November 1956. This, in a way, brought new hope to Muslims in erstwhile Hyderabad and Andhra states as they were re-united after a gap of 150-odd years under a bigger state.

The gentlemen's agreement, Mulki rules and other safeguards for Telangana people, including local Muslim population, were reassuring measures. The new state also opened up opportunities for the people of Seemandhra, including Muslims. Despite initial hiccups, the new dispensation brought hope to Muslims as they felt that their socio-cultural and economic and political interests would be protected in AP. When things were settling down, the state was rocked, first, by the separate Telangana movement during 1968-1971 and, later, by separate Andhra agitation in 1972-73. Indira Gandhi brought peace with a patch-up formula for both the regions. The presidential order and the six-point formula were hammered out to restore equilibrium between the regions. Largely because the successive governments, led by Congress and TDP, failed to implement these safeguards in letter and spirit, the separate Telangana movement was revived periodically. Congress under Y S Rajasekhara Reddy first raised the slogan of Separate Telangana and petitioned to Congress president Sonia Gandhi in the year 2000. Seizing the opportunity, K Chandrasekhar Rao launched Telangana Rashtra Samithi in April 2001. What followed is contemporary history known to one and all.

The issues concerning social, cultural, linguistic, educational and economic backwardness of the minorities, particularly Muslims, persisted even though the successive governments made piecemeal attempts to address these concerns. However, some of the initiatives bore fruits and helped raise the enrolment of minority students at the school education level, besides opening up job and self-employment opportunities. The minority welfare budget soared from zero almost 15 years ago to Rs 1,027 crore in the current financial year.

Minorities' empowerment, however, remained an area of concern. Out of 60 MPs from the state, there are only two Muslims (only one out of 42 LS members and one out of 18 RS members). In the state Legislature, there are 11 Muslim members in the 294-member Assembly and 9 Muslims members in the 90-member council. The representation of Muslims, who constitute 10% of the state's population, is far worse in rural and urban local bodies--municipal corporations, municipalities, Zilla Parishads, mandal parishads and gram panchayats. The fear is that smaller states would mean more marginalization and dis-empowerment of Muslims and lesser financial resources for their welfare.

(The writer is a member of legislative council and a journalist)