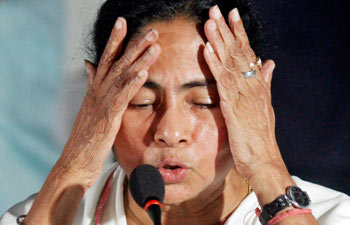 An enraged mob then tracked one of the miscreants and lynched him to death, reports added.

The spotlight is also on Singur and Nandigram, known for the intense protests against farmland acquisition that caused the ouster of the long entrenched Left Front government and propelled Mamata Banerjee to the chief minister's chair.

The two rural hamlets would be part of the elections in 12,869 seats in the three-tier rural bodies spread over three districts - Hooghly, East Midnapore and Burdwan.

While 95,25,320 voters are eligible to choose their representatives in the three districts covering 10,637 gram panchayats, 2047 panchayat samities and 185 zilla parishad seats, all eyes will be on Singur in Hooghly and East Midnapore's Nandigram -- which gained national and international spotlight during the last lap of the Left Front's rule.

In Nandigram, about 125 km from Kolkata, the LF regime's plans to acquire 10,000 acres of land for a special economic zone (SEZ) triggered violent agitation spearheaded by Banerjee's Trinamool Congress which eventually resulted in death of 14 farmers in police firing March 14, 2007.

The state government scrapped the project, but Trinamool rode on the anti-land acquisition protests to successfully woo large sections of the rural masses -- for so long aligned with the Left Front -- and made substantial gains in the 2008 panchayat elections.

Keeping up the momentum, the Trinamool later swept the Lok Sabha and Assembly polls in the area. The LF spearhead Communist Party of India-Marxist (CPI-M) now looks only a ghost of its former formidable self in the belt, failing to even put up candidates on several of the seats.

The CPI-M has, however, rapped the Trinamool for letting loose a reign of terror and preventing its candidates from filing nominations. On the other hand, the Trinamool has alleged that the Marxists failed to find candidates as people have totally "deserted" them.

But it was Singur, which was the cradle for then Banerjee's save farmland movement between 2006-2008 after the LF government acquired 997.11 acres of land for setting up a Tata Motors factory, from where the world's cheapest car Nano was scheduled to roll out.

Demanding return of 400 acres to "unwilling farmers" (from whom land was allegedly taken against their will), the Trinamool launched a violent and sustained movement that ultimately forced the automobile giants to shift their plant to Sanand in Gujarat.

The Trinamool reaped the benfits of the movement, and won the 2008 panchayat, the Lok Sabha elections a year later and the Assembly polls with massive margins from the area.

The abandoned factory still stands like a haunted house, but the famers are yet to get back their land due to litigation.

The Banerjee government had passed the Singur Land Rehabilitation and Development Bill, 2011, and acquired the land. But the auto makers moved the court.

Though a single bench of the Calcutta High Court ruled the act valid, a division bench declared it unconstitutional and void, and the matter is now pending before the Supreme Court.

There have been reports of dissension among a large number of peasants, who had stood solidly behind Banerjee during her movement, as they face hardship having lost their land and not taken any compensation cheque from the Left Front.

However, the CPI-M and its other LF partners seem to have become organisationally weak in the entire Hooghly district, where the Marxists enjoyed a virtual monopoly of power for years.

It remains to be seen, whether the dissension translates into some gains for the LF, or the Trinamool succeeds in retaining its hold.