The different state government employees union in the Darjeeling hills has decided to form a co-ordination committee on Monday to put up a united face as the state government has decided to cut pay of those employees who did not attended office during the GJM agitation. The decision to form the umbrella organisation was taken at a meeting of representatives of various unions convened by the Gorkha Janmukti Morcha in Darjeeling on Monday. GJM assistant secretary Jyoti Kumar Rai said "a meeting of various employees  unions in the hills was held at Patlasbas in Darjeeling. All the unions present during the meeting have decided to form a co-ordination committee to take forward the statehood agitation." 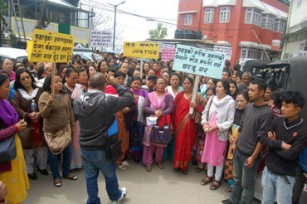 Rai said the state government s move to deduct the salaries of the employees absent during the shutdown had also been discussed at Monday's meeting. "Since the government has only served show-cause notices on the employees and has not yet issued an order to deduct the salaries, we haven t taken any decision in this regard. However, in the event of a salary deduction, all unions are ready to take the matter to the high court," he said.

Rai said the formation of the co-ordination committee would be finalised on September 21. "The body will consist of two representatives each of various unions. We nominated Tshering Tamang of the Janmukti Secondary Teachers  Association as the convener of the body. The final structure of the body will be known after a meeting on September 21," he said. Meanwhile, GJM president Bimal Gurung has appealed to the All India Lepcha Association to call off its relay hunger strike in Darjeeling on Tuesday. "Since the Morcha has also suspended its agitation following a request from the Union home minister, our party president has appealed to the Lepcha forum to lift the relay fast," said Rai.