Dance India Dance Super Moms - She is a non-dancer, but her power-packed performances week after week helped Kolkata-based Mithu Chakraborty, a mother of two boys, bag the 'Super Mom' title as she walked away with the winner's trophy of the first season of dance reality show 'Dance India Dance Super Moms' here Sunday.
Mithu, 34, competed for the title with four other contestants -- Shraddha Shah (Surat), Phulwa Khamkar (Mumbai) (Maharashtra), Cecille Rodrigues (Goa), Zoya Khan (Dehradun).
She received the trophy from actress Sonakshi Sinha, and she thanked actor Mithun Chakraborty, the show's 'grandmaster', for giving her a chance to come on the show. 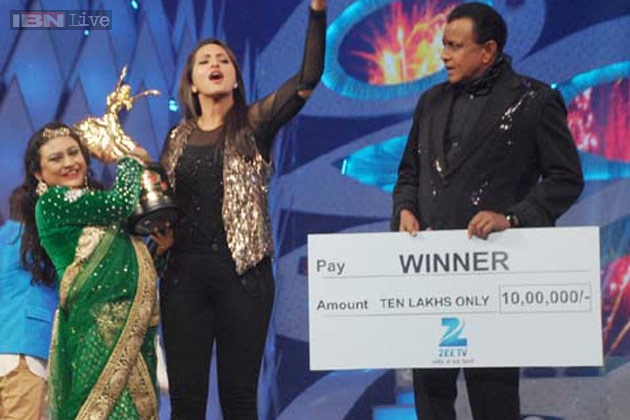 "Main Mithun da ka shukriya ada karna chahti hun jo mujhe yahan le kar aaye aur mujhe yahaan perform karne ka mauka diya (I want to thank Mithun-da for bringing me on this stage and giving me a chance to perform)," Mithu said after being adjudged the winner of the show based on audience voting.
As part of her victory on the show, she took home a trophy and a cheque of Rs.10 lakh.
The runners-up trophy of the show was Cecille, who was given a trophy and Rs.5 lakh.
The third, fourth and fifth positions were occupied by Shraddha, Zoya and Phulwa, respectively. They received a cheque of Rs.1 lakh each from the channel Zee TV.
Judged by choreographer Marzi Pestonji and choreographer-filmmaker Farah Khan, the show went on air June 1. It was hosted by actor-anchor Jay Bhanushali.
Choreographer Terrence Lewis was also seen on the judges' panel for a short period.
The 15-week series kickstarted with 16 dancers who were divided into four groups. DID skippers Raghav Crockroaz Juyal, Prince Gupta, Siddhesh Pai and Jai Kumar Nair were in charge of the four groups.
The grand finale was hosted by Jay and actor Rithvik Dhanjani.
Sonakshi made an appearance on the show to promote the upcoming film 'Boss', in which she will be seen in a song titled 'Party all night'. The actress even took to the stage to perform on the song.
Apart from the performances by the top five contestants, even the hosts of the finale grooved to hit numbers like 'Khali pili' and 'Dilliwali girlfriend'.
The last performance of the evening was by the top five contenders, who presented a spectacular act jointly.
A key announcement about a new dance show, 'DID Dance Ka Tashan', was also made. It will be a competition between the contestants of 'DID Super Moms' and 'DID Dance Ke Baap', the kids who were part of 'DID Li'l Masters'. The show will start Sep 21 and it will be judged by choreographer Ahmed Khan.