Surprising and shocking many in Bollywood, The National Film Development Corporation of India’s (NFDC) Gujarati production The Good Road has been selected as India’s entry to the Oscars this year despite a lot of buzz about debutant director Ritesh Batra’s film Lunchbox being the 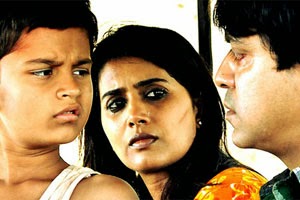 The overjoyed director had no idea that his film was in the running for the Oscars and was surprised to know it had been selected as India’s entry this year.
“I can’t believe it. It is a great feeling and I am recovering my breath and understanding the implications. I hope we win,” said Correa

The dark and gritty film revolves around three people discovering themselves while on a road trip through Kutch.

Even the film’s star Ajay Gehi was caught unawares. “I’m surprised as I didn’t know. You (HT) are the first one to tell me. It wasn’t a big budget commercial film but the team was very driven. I connected with the script.”

Gujarat chief minister Narendra Modi tweeted his congratulations to the cast and crew, “Delighted to know that Gujarati film ‘The Good Road’ has been chosen to represent India at Oscars. My best wishes.”

While those involved with the film were overjoyed, others in the film fraternity were shocked and some were disappointed.
Actor Nawazuddin Siddiqui, who plays Aslam Shaikh in the Lunchbox, was thunderstruck: “I was 100 per cent sure that The Lunchbox is going for Oscars. It’s a shock that it didn’t. I have never heard of The Good Road.”

Filmmaker Anurag Kashyap was also flummoxed by the choice and felt the federation needs a policy regarding Oscar entries. “Feeling very very disappointed, can’t comment on the film I have not seen, but it better make it to final five,” he tweeted.

“We should make a clean policy (for film selection), you want to send the best film, then send the national award winner,” he added.
Even Karan Johar was taken aback: “Really shocked and disappointed.. #LUNCHBOX had every factor working in its favour... we may have just lost our golden chance.. SAD!!!.” he said in his tweet.

Brushing off these reactions Correa says, “They are entitled to their opinion, what can I say?”

But not all reactions were negative, actor- filmmaker Arbaaz Khan supported the decision, “Any film that gets recognised at the Oscar is a proud moment for the filmmakers and the country that it comes from. It is a very proud moment.”