Himalayan Drive-2 kicked off from City Centre in Siliguri

The rally was flagged off from City Centre around 2pm.

There are 28 four-wheelers and eight two-wheelers, each with a driver and a navigator who will cover a distance of 800km in four legs. 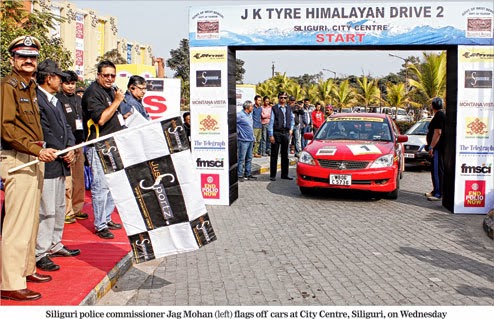 Jag Mohan, the commissioner of police, Siliguri, and Sunil Agarwal, joint director (north) of state tourism department, were present at the flag-off.

“The rally is conducted in a time-speed-distance format which means the participants should cover a particular distance in a stipulated time. There are two participants in each vehicle. One will navigate the route, the other will drive. Today (Wednesday), the rallyists will halt at Murti, 60km from here for the night. They will start off for Lataguri tomorrow (Thursday) and reach Gangtok from there by evening. On Friday, they will leave Gangtok for Darjeeling. On Saturday, the rally will reach Siliguri from Darjeeling,” said Tamal Ghosal, director of Just Sportz. 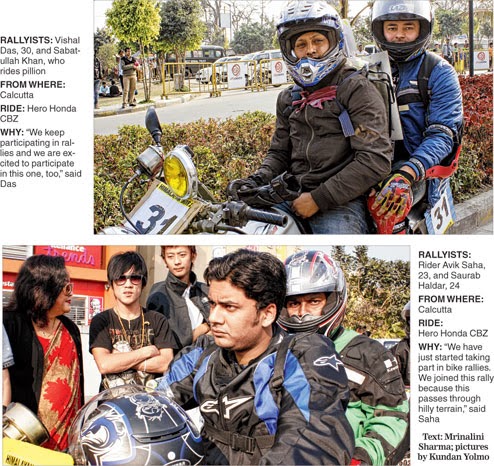 There will be separate winners and runners-up for two-wheelers and four-wheelers. While the winners in each segment will be awarded a cash prize of Rs 1 lakh, the runners-up will get Rs, 75,000 each. A participant from north Bengal who arrives first at the final destination will be awarded a trophy.

Organisers said the rally was being organised for a social cause.

“Rotary International is our social partner and we are championing the cause of ending polio through the rally. All our banners and posters have the slogan ‘End Polio Now’,”said Subhasish Chatterjee, local co-ordinator of the rally, at Siliguri.

The flagging-off was conducted with much fanfare with a band playing every time a car or a bike set off.

There was an excited crowd of around 500 people to cheer the rallyists when they embarked on their journey.

“I am an adventure enthusiast myself but I could not participate in the rally for some personal reasons. I have come here to encourage the rallyists and cheer them when they take off from here,” said 30-year-old Saurav Chatterjee from Siliguri.

The participants were excited to start the journey.

Sarbari Bhattacharjee, the only female participant, was there with her husband Bibhas.

“We are from Siliguri and got to know about the event from friends. As we have not undertaken such a rally before, we decided to participate in this one for thrill and adventure. I am excited because I happen to be the only female participant in the rally. I will navigate while my husband will drive,” she said.

Vishal Das, a 30-year old entrepreneur from Calcutta, has been participating in the rallies for the past 14 years. He is with friend Sabatullah Khan.

“We are really excited about this trip and plan on winning it,” Das said.