Late in the evening on Tuesday Bimal Gurung  came up with the Facebook update appealing the gorkhas in India  to vote for the BJP candidate in the upcoming Lok Sabha. His stand to support the BJP candidate instead of filing own candidate was because it was BJP who for the first time voiced our 107 years old demand in the parliament.He further added BJP is in favour of the smaller states in India. 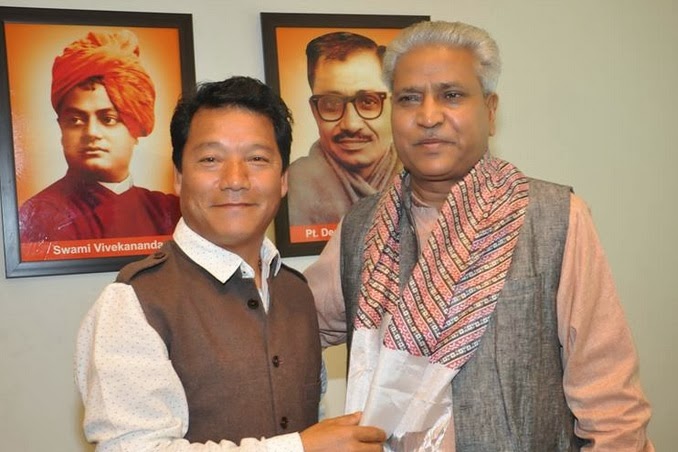 However, according to indianexpress Sinha a BJP minister whom GJM deligation headed by Bimal Gurung met in Delhi and came up with the decision to support BJP in the 2014 Lok Sabha election  said "Discussing BJP’s stand on the GJM’s demand for a separate state (Gorkhaland), the BJP state president said there had been a clear message from the party high-command that there would not be any division of West Bengal. “But demands of the GJM would be paid due attention to and their development would be ensured,”

GJM supported BJP candidate Mr. Jaswant Singh from Darjeeling in 2009, who announced before election to become permanent resident of Darjeeling. It was then greeted by the common mass like anything. But giving it a stark contrast after winning, Mr. Singh hardly remained with the local people.

Bimal Gurung had then said "Being heavyweight candidate, he (Mr. Jaswant Singh) will be able to press hard in favour of our cause,". But, according to the parliament record, as MP from Darjeeling during last five years, Mr. Singh raised no question and no private member bill. Took part in only 13 debates. . Out of these, only two had some relationship with Darjeeling. But he has spent 99.4% of his MPLAD fund though- "hardly any visible sign of that is there in Darjeeling constituency," said even many GJM supporters.

Following were his exact words in FB:-

"I am making this earnest appeal to to all Gorkhas and firm believers of Gorkhaland to come out and vote for the BJP. the time has come to set aside all our differences-political, social, cultural, linguistic, intellectual, economic etc and join hands for the greater good of the greater number. Posterity will judge us on the basis of the verdict of the elections this year.

Many may have several questions as to why the BJP? In the last elections , with our support the BJP won . For the first time our 107 year old demand for a separate was raised in Parliament. The whole Nation came to know of the plight of the Gorkhas and their justified demand.

The BJP's advocacy of smaller states in the Federal polity is a positive sign for realignment of the boundaries of India. The BJP's commitment to "sympathetically consider the long pending demands of the Gorkhas, Adivasis and other people of Darjeeling District and Dooars region" proves the sincerity of the party.

We must be conscious of the sinister designs of those who oppose us. Their divisive politics is aimed at bringing a rift among a united Gorkha Community. They aim at misleading our youth, intellectuals, women and members of other communities by making false promises.

Once again I appeal to all -- please support the BJP . Our hopes, aspirations, dreams lies in helping the BJP win convincingly. Posterity will always remember us for taking the right decision."