The Gorkha Janmukti Morcha today announced it will extend support to the BJP in the state, including in the Darjeeling Lok Sabha seat from where the Trinamool Congress is fielding footballer Bhaichung Bhutia as its candidate. The BJP wants Bappi Lahiri there, but the GJM wants to field someone itself. 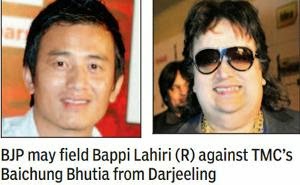 “GJM president Bimal Gurung called me yesterday (Sunday) and assured his party will support our candidates there (in Bengal),” state BJP president Rahul Sinha said. This was after the BJP’s Siddharth Nath Singh, Raju Pradhan and Vinay Tamang met the GJM’s Bimal Gurung in Delhi.

Gurung told The Indian Express, “We want a GJM candidate in Darjeeling, though we will support the BJP candidates in Jalpaiguri and Alipurduar. A final decision on the candidate would be taken Thursday.”

About Bhutia, Gurung said, “We have no problems with him. But the Trinamool is playing divisive politics. They cannot win Darjeeling this way.”

Last week, Lahiri had told The Indian Express he did not want to contest. Now, he said, “ I have been offered the Darjeeling seat. But the decision has not yet been finalised. I may agree this time, but let the party decide first.”