At the call of Gorkha Janmukti Morcha (GJM) president and Gorkhaland Territorial Administration (GTA) chief executive Bimal Gurung,  members of the newly formed Bharatiya Gorkha Janjati Sangharsh Mahasangh (BGJSM), comprising 10 communities from the hills of Darjeeling, will be in Delhi on December 17 to press their demand for inclusion of these communities in the list of scheduled tribes. 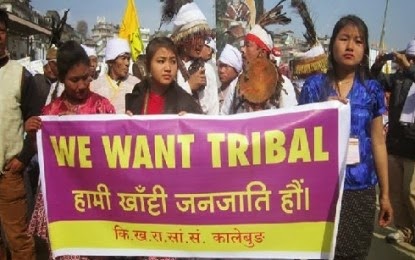 “We have been called to Delhi by the GJM president to meet concerned ministers on December 17. We have been asked to take one member each from the 10 communities, to get a grip of what is happening with our demand, for ourselves. We will be leaving for Delhi today”. BGJSM president Kanchan Gurung said on Monday.

“Darjeeling MP S.S.Ahluwalia who is presently also in Delhi will facilitate our meetings with ministers and officials, there,” he said. The BJP leader has backed the GJM demand and also taken up the issue in the Centre.

In August, Gurung had met union tribal affairs minister Jual Oram in Delhi and took up the demand for conferring tribal status to 11 communities of the Hills including one from plains. He had also submitted relevant documents to strengthen the demand.
On his return to Darjeeling, the GTA chief executive had met members of the 11 communities and apprised them about the development in Delhi. He had then also promised to invite these communities to Delhi to meet concerned ministers to take forward the demand. “A lot of positive inroad has been made in regard to the demand of conferring tribal status to ten communities from the Hills. We are doing everything for speedy implementation. In fact, when I go to Delhi next time, I will invite representatives from these communities to Delhi to meet concerned ministers to see for their own what is happening,” Gurung had than said.
The 10 communities from the Hills are Bhujel, Gurung, Mangar, Newar, Jogi, Khas, Rai, Sunwar, Thami, and Yakkha Dewan and Dhimal from the plains of Dooars.
The demand for tribal status to the Hills communities is also mentioned the 2011 GTA agreement which was signed by the state and central government. The agreement says that all Gorkha communities of the Hills excepting the Schedule Caste will be conferred tribal status.
The BGJSM president before leaving for Delhi said that he was hopeful of a positive outcome from the visit. “Each of us has been struggling for the demand on our own ways for a long time but without any result. None of the other political parties of the Hills have either lent support or facilitated our endeavor. But, this time we are hopeful and our anticipation high that with the GJM backing our demand, our effort will bear fruit,” he said.
Interestingly, in February this year, West Bengal chief minister Mamata Banerjee had taken up the issue and made a recommendation to the Centre to enlist 10 Hills communities in the tribal status category. However, replying to a RTI filed by an individual, the tribal welfare ministry in June rejected the state government’s recommendation.