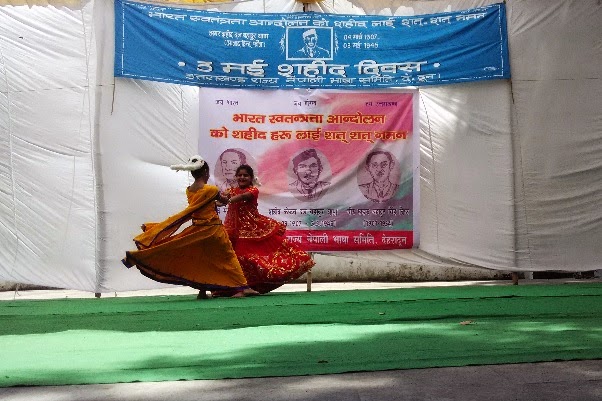 Students from the Carnival School Garhi sang a patriotic song and gave dance performance on this occasion. Sh Shiv Lal Ale gave out the life history and  act of valor for the attainment of independence of Sahid Capt Dal Bahadur Thapa, Miss Komal Gurung composed a poem on the recent tragedy in Nepal and recited the same to the audience.  The chief guest in his speech heralded the organizers to organize this fuction in the memory of the Sahid. Sh Guru Prasad Ranakoti laid emphasis on remembrance of our sahids and that they should never be forgotten. Our young generation should embibe from the sacrifices of our Sahids. He also said that the Gorkhali language should be included in the schools as subject for which we need to struggle and consistently approach the state government. We must pursue our demand for the construction of Sahid gates on all entry point of Dehra Dun.

At the end, Sh Shiv Lal Ale read out the demand of erecting a Sahid Capt Dal Bahadur Thapa dwar at the entry point of the road presently existing on his name in Garhi Cantt. The demand is addressed to the Cantonment Board Dehra Dun.