Home > TMC > Mamata to visit Darjeeling has set the political temperature in the hills rising.

Mamata to visit Darjeeling has set the political temperature in the hills rising.

The Bengal CM Mamata Banerjee is headed for Darjeeling, and she is expected to arrive here on the 16th of June for a three-day visit. 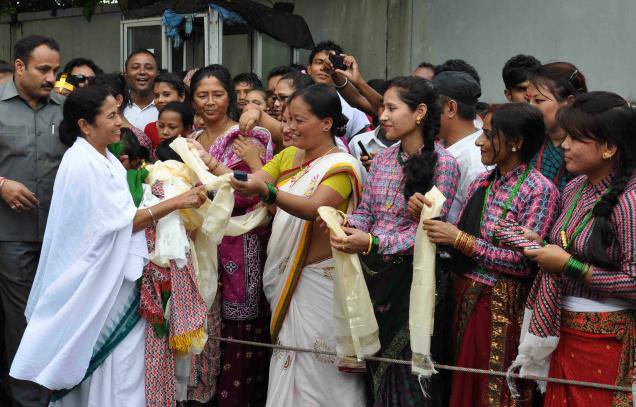 In the backdrop of the arrest warrants issued against the GJM top echelon, her visit has set the political temperature in the hills rising.

Observers have hinted that the state is counting on GJM to resign en-mass if Bimal Gurung is arrested. If that happens, then the state is set to call for a new elections to the GTA, and hence Mamata could try and work out a coalition with the newly formed 'Democratic Front' in this visit.

TMC has an excellent record of strengthening itself by poaching disgruntled politicians from other parties, and some speculate that TMC may directly try to lure in GJM sabhasads once Bimal and other GJM leaders are out of the equation due to arrest.

However, a section of observers have also stated that Mamata may join hands with Bimal once again, and implore to the Center to go slow on the investigations, if GJM promises not to pursue Gorkhaland statehood demand.

It might be recalled that Ms. Banerjee was the Chief Minister who handed over the investigations into Madan Tamang murder case to the CBI, and that Late. Madan Tamang's son, Sanjog Tamang later joined TMC, and had specifically stated that he is doing so to ensure justice for his father [Details: https://youtu.be/ULJ-UXHY0_Y]

Hence, this visit by TMC Chief Mamata Banerjee has generated a lot of political interest here in the hills.