The private member bill moved by Opposition MLA for restoration of Nepali Seats in the State Assembly of Sikkim in the ongoing budget session has created uproar both inside and outside of the Assembly. Looking at the current development on the Representation of People's (Amendment) Act 1980, Gorkha Apex Committee who are seriously pursuing the demand of Debate on the said Act in both State and National Level and hence, keeping in consideration of the larger interest of the people of Sikkim it has become a matter of utmost importance to clarify certain expects of the Representation of People's (Amendment) Act, 1980. 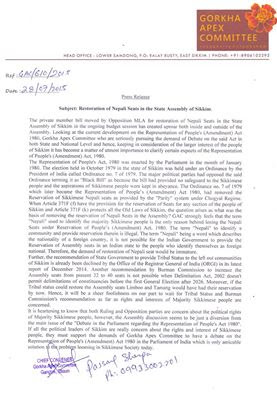 The Representation of People's Act, 1980 was enacted by the Parliament in the month of January 1980. The election held in October 1979 in the state of Sikkim was held under an Ordinance by the President of India called Ordinance no. 7 of 1979. The major political parties had opposed the said Ordinance terming it as "Black Bill" as because the bill had provided no safeguard to the Sikkimese people and the aspirations of Sikkimese people were kept in abeyance. The Ordinance no. 7 of 1979 which later became the Representation of People’s (Amendment) Act 1980 had removed the Reservation of Sikkimese Nepali seats as provided by the "Parity" system under Chogyal Regime. When Article 371F (f) have the provision for the reservation of Seats for any section of the people of Sikkim and Article 371F (k) protects all the Old Laws of Sikkim, the question arises as what was the basis of removing the reservation of Nepali Seats in the Assembly? GAC strongly feels that the term "Nepali" used to identify the majority Sikkimese people is the only reason behind losing the Nepali Seats under Reservation of People’s (Amendment) Act, 1980. The term "Nepali" to identify a community and provide reservation therein is illegal. The term "Nepali" being a word which describes the nationality of a foreign country, it is not possible for the Indian Government to provide the Reservation of Assembly seats in an Indian state to the people who identify themselves as foreign national. Therefore, the demand of restoration of Nepali seat would be immature.

Further, the recommendation of State Government to provide Tribal Status to the left out communities of Sikkim is already been declined by the Office of the Registrar General of India (ORGI) in its latest report of December 2014. Another recommendation by Burman Commission to increase the Assembly seats from present 32 to 40 seats is not possible when Delimitation Act, 2002 doesn't permit delimitations of constituencies before the first General Election after 2026. Moreover, if the Tribal status could restore the Assembly seats Limboo and Tamang would have had their reservation by now. Hence, it will be a sheer foolishness on our part to wait for Tribal Status and Burman Commission's recommendation as far as rights and interests of Majority Sikkimese people are concerned.

It is heartening to know that both Ruling and Opposition parties are concern about the political rights of Majority Sikkimese people, however, the Assembly discussion seems to be just a diversion from the main issue of the "Debate in the Parliament regarding the Representation of People's Act 1980''. If all the political leaders of Sikkim are really concern about the rights and interest of Sikkimese people, they must support the demands of Gorkha Apex Committee to have a debate on the Representation of People's (Amendment) Act 1980 in the Parliament of India which is only amicable solution to the problem looming in Sikkimese Society today.