A Reflection on the eve of 24th Nepali Bhasa Manayata Diwas

Twenty three years ago on 20th August, 1992 after years of struggle, the lingua franca of the Gorkha community i.e. Nepali language was officially recognised and included in Eighth Schedule of the Indian Constitution. It was a major step forward in the struggle of the Gorkhas in India to demolish the arguments/doubts which were trying to obstruct and eliminate the aspirations for a separate state of Gorkhaland. The Indian state has time and again patronised the community as a martial race but when the same community demanded their democratic right to have a separate state, the nationality and patriotism of community was put on serious doubts. In order to delegitimize the genuine democratic demand for separate state, all vitriolic arguments of Gorkhas being foreigner, and illegal migrants were raised by the national leaders in both the centre and the state. Since the lingua franca of the Gorkha community is the same language as spoken in Nepal, it was argued that we were foreigners. The Nepali language is spoken by more than 20 million people in India, mostly in West Bengal, Sikkim, Assam, Manipur, Tripura, Arunachal Pradesh, Meghalaya, Nagaland, Mizoram, Jammu and Kashmir, Himachal Pradesh, Uttar Pradesh, and Punjab. The State Legislative Assemblies of Sikkim, West Bengal, Tripura and Himachal Pradesh have passed resolutions for inclusion of the Nepali language in the 8th Schedule of the Constitution of India. Overcoming all odds of discrimination and humiliation, leaders like Anang Singh Thapa, Ratanlal Bramin, Dil Kumari Bhandari mobilised the Gorkhas scattered around India, and fought the arduous battle for the constitutional recognition of the Nepali language. 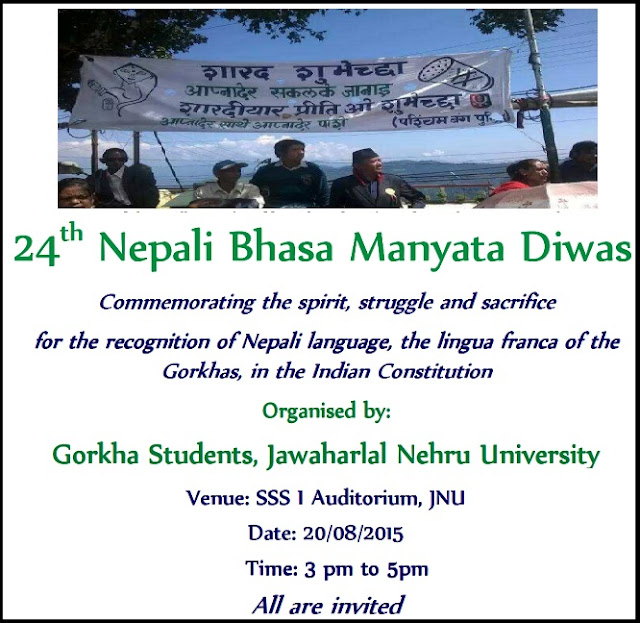 Despite getting constitutional recognition, the unbroken chain of exploitative moves of West Bengal Government against the Gorkha community based on its linguistic identity has not changed rather worsened overtime. The Nepali language is still not included as an optional language paper in the West Bengal Civil Service Examination (WBCS). While all other optional language/subjects like Bengali, Hindi, Urdu, Sanskrit, Santhal and even Pali are included but only Nepali language has been excluded for years without giving any explanation. This is at a time when Union Public Service Commission (UPSC) has already allowed candidates to choose Nepali as an optional language paper after the inclusion.

Be it the denial of eligible candidates in WBCSC for not knowing Bengali language or the issuing of Panchayat forms and scholarship exclusively in Bengali or the faulty edition of Nepali text books of Class XI and XII, the discriminatory policies of Bengal towards Gorkhas on the basis of language has not ended. One of the recent glaring examples was that of the West Bengal Police’s poster in Chowrastha, Darjeeling. Very strangely the poster’s message was in Bengali and written in Nepali script.

It is one of the small examples of how the ruling class of Bengal are imposing their culture on us. Huge advertisement hoardings written in Bengali are coming up in places like Kurseong, where majority of the population cannot even read Bengali. Even from market logic, it does not make any sense. This is an attempt by the ruling class of Bengal to normalize the “Bengalisation” process of our imaginations and thoughts.

These are some manifestation among many that has come to notice most recently. It cannot be seen as a minor aberration rather as a reflection of the deep rooted colonial practices of the ruling class that has continuously ensured to maintain this exploitative relation to dominate the Gorkhas and curb all possibility of their development and selfassertion. The deliberate political domination of Gorkhas historically has been operationalised through different forms of ‘othering’ of the community- culturally, administratively and economically. It is the sheer insecurity and arrogance of the political masters of Bengal that has led to denial of opportunities to eligible Nepali speaking candidates. Not to mention the spell of discouragement, despair and insecurity that has gripped other Nepali speaking students in higher education who hold similar ambitions. This racial and linguistic discrimination has most obnoxiously trampled upon the aspiration of Nepali speaking population. These colonial expropriation polices of the Bengal government must be exposed and condemned.

It is in this context we take inspiration from the struggle and sacrifice of our people who fought vehemently for the recognition of Nepali language in the Indian constitution. We harden our resolve to fight against this cultural imperialism of Bengali ruling class. Their oppression will only strengthen our fight for a democratic Gorkhaland.

Commemorating the spirit, struggle and sacrifice for the recognition of Nepali language, the lingua franca of the Gorkhas, in the Indian Constitution.We are organising 24th Nepali Bhasa Manyata Diwas in JNU. All are invited. Please spread the words.