The Gorkha Janmukti Morcha leadership is getting increasingly unhappy with Mamata Banerjee's style of functioning visa-a-vis the hills less than a fortnight after Bimal Gurung welcomed the chief minister in Darjeeling with a bouquet. 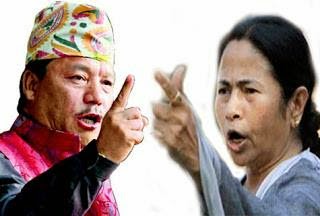 The Morcha's disillusionment with the chief minister stems from her move to launch a campus of the Presidency University in the hills and the district administration's crackdown on illegal buildings in Darjeeling.

Mamata is scheduled to visit Kurseong and Kalimpong for three days from September 16.

"On one hand, Mamata Banerjee talks about the welfare of the hill people and gives an impression that she is now close to the Morcha leadership. But on the other hand, she continues to promote sectarian politics, interfere in matters related not only to the GTA but also Darjeeling municipality. The chief minister is also using the district and police administration to promote her vested political interests," a senior Morcha leader said on condition of anonymity, as he was not authorised to speak by Bimal Gurung.

Relations between Mamata and Bimal Gurung were perceived to have improved considerably, especially after a meeting between the two leaders at Richmond Hill in Darjeeling on June 17.

The Morcha leader said whenever the chief minister visited Darjeeling, "some problem or the other is created or left behind". "During two of her visits to Darjeeling this year, she created the Sherpa board and Bhutia board, which we believe is part of an agenda to divide and rule the hill people," said the Morcha leader.

On September 16, Mamata is expected to inaugurate an educational hub in Kurseong, including a campus of Presidency University. The Morcha leadership is, however, is against the campus as they believe such an institution of higher education will dilute the demand for a central university.

"Apart from all this, the government is now directing the district administration to dismantle buildings in Darjeeling. A team of the building verification committee is scheduled to reach Darjeeling tomorrow. Issues related to construction vests with the civic body but the state government is also interfering in the matter," said another Morcha leader.

"Maybe the state government wants to take control of the Darjeeling municipality area by spreading terror among the residents of Darjeeling vis-à-vis the high rises," said the Morcha leader.

Morcha leaders are expected to hold a meeting with Bimal Gurung on September 9 on these issues, once he returns to Darjeeling from Digboi, Assam, where he is presently visiting.