‬A team of representatives from various Gorkha communities led by former Kurseong MLA Dr. Rohit Sharma met the Central Minister for Tribal Affairs Mr. J in Siliguri yesterday and placed the demand for the inclusion of the Gorkha communities in Scheduled Tribe community. The Minister Mr. Jual Oram assured the representatives that the demand will examined sympathetically.

The Hon’ble Minister Mr. Jual Oram has in turn assured the representatives that the demand for inclusion as STs would be examined sympathetically and following the existing norms.

It might be noted that under the British, all the constituents of Gorkhali community were treated as “Hill Tribes,” and thus Darjeeling and Dooars where Gorkhas are in Majority were treated as a “non-regulation district” which meant that rules and laws developed in rest of the province would not be applicable in the region, without the express agreement from the governor, however that distinction was eradicated once India gained Independence.

The attempt by various Gorkha groups to be recognized as tribal, is seen as a move to assert the Gorkha autonomy over existing Bengal government disposition.

Via: The Darjeeling Chronicle / Darpan 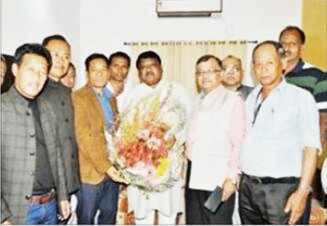