Much Hyped Debate An Exercise in Futility

The much hyped debate between GTA's "Chief Advisor" Mr. Swaraj Thapa and till recently GJM MLA from Kalimpong Dr. Harka Bahadur Chettri was a downer, to say the least.

We were expecting fireworks and revelation of the inner-workings of GJM, GTA and the associated Gorkhaland movement, what we got was the same old "ghisa pita dialogue."

There were two main topics on the anvil: i) Gorkhaland statehood and the ongoing GJM Padyatra; ii) District status for Kalimpong sub-division.

The usual suspects, said the usual thing and left more questions unanswered than there were questions to begin with.

Speaking for the motion in support of "Padyatra for Gorkhaland" GTA's 'Chief Advisor' Mr. Swaraj Thapa unabashedly drew parallel with the padyatras undertaken by Gandhiji during India's freedom movement and claimed that, "just as how Gandhiji's padyatra went on to become successful in strengthening India's freedom struggle, GJM Chief Bimal Gurung's padyatra would be successful too in fulfilling the Gorkhaland dream.

On expected lines, Dr. Chettri detracted the claim, and stated that the Padyatra will not reach its destination. He argued that “in fat when we look at all the activities undertaken by GJM, Gorkhaland seems to be an unreachable dream, which will remain unfulfilled.” He further claimed that, Gorkhaland has become a begging bowl, for various nefarious elements to take advantage of the hill sentiments.

Before we forget, let us remind our readers, Dr. Chettri was with GJM a month ago.

The 2nd issue was that of Kalimpong district, to which obviously Dr. Chettri proposed hope in the benevolence of Bengal Chief Minister Mamata Banerjee and claimed that “Kalimpong will be declared a district and the process for the same has already started.” However Dr. Chettri declined to name a timeline for when it would happen. He claimed that “when this demand will be fulfilled will depend on the Chief Minister and Bengal government.”

Rebutting him Mr. Thapa claimed that, “looking at the state of West Bengal government, especially that of Chief Minister Mamata Banerjee that will not happen anytime.” He said that if Bengal were serious then the Bengal cabinet could approve the formation of a separate district for Kalimpong in a month’s time, however he articulated doubt that Bengal was merely using Dr. Chettri to divide the hill community to derail the Gorkhaland movement.

At the end of the debate anchored by Kalimpong Television Director Narendra Tamang and assisted by Himalaya Darpan journalist Mr. Taran Gurung and journalist from Jansarokar Mr. Chewang Yonzon there was no obvious winner, however there were obvious losers – the people of Darjeeling region, who all had come to watch a debate, and ended up watching avant garde political posturing which lead to nowhere.

What a waste of time. 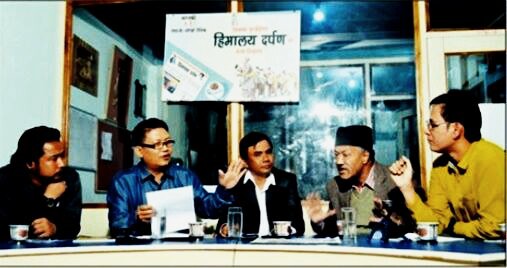