Home > Run with Roshni > Delhi Book Release: Roshni Rai’s “From the Mountains to the Ocean”

Delhi Book Release: Roshni Rai’s “From the Mountains to the Ocean”

The book release event of Roshni’s Rai’s book “From the Mountains to the Ocean” took place at New Delhi today, 29th of November 2015. Roshni Rai, an advocate by profession is also an ultra-marathon runner and a motivational speaker from Darjeeling.

Roshni Rai is also the founder of “Run Run with Roshni” foundation through which she supports underprivileged Gorkha runners from across India to run in different nation and international marathons run in Mumbai, Hyderabad, Chennai, Shillong since the year 2012. The vision of ‘Run with Roshni Foundation’ is to find and nurture talented runners from the Gorkha community to represent the country in international and Olympic Games. In every marathon they participate, the team from “Run with Roshni” wears t-shirts with slogan- “WE ARE GORKHAS PROUD TO BE INDIAN. JAI GORKHA JAI HIND!” 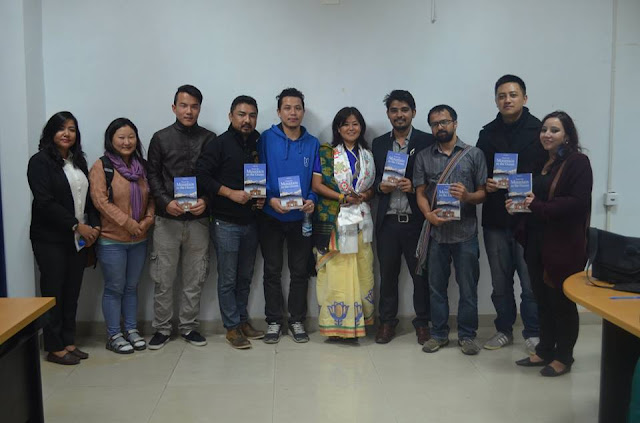 Her book “From the Mountains to the Ocean” is the culmination of her journey as a little girl from a remote village in Darjeeling to Mumbai in 2004 through self-discovery and realization in the process. The book narrates the story of Rai’s passion for Running and the vision to highlight the social issues of the Gorkha community through the medium of sports. Interspersed with the history of Darjeeling and of Gorkhas, the book also talks of her struggle to get Gorkhas recognition as Indians through her initiative `Run with Roshni’, whereby she is enabling underprivileged youth from Darjeeling to run marathons across the country.

Speaking at the occasion, Prof Mahendra P Lama emphasized on the need for the community to focus on Education. Citing examples of the contribution of upcoming writers like Roshni Rai and Jyoti Thapa to highlight the different aspects and aspirations of the Gorkha community in various subjects and fields. Roshni Rai also answered questions from the audience on the subject and theme of the book, the challenges and here experiences while publishing her maiden book “From the Mountains to the Ocean.” Roshni Rai was also extended an invitation to the Tenzing Hillary Everest Marathon 2016 in Nepal. The event ended with an informal interaction with Roshni Rai and the audience over some light refreshment. Roshni Rai also signed copies of her book and readily agreed to selfied and pictures with the fans.
Extending heartiest congratulations to Roshni Rai for her achievements, Gorkha Youth and Students’ Association (GYASA) wishes Roshni Rai much more success in the coming future. We will continue support in her endeavor and vision for the question of an Olympic medal from the community.