The Democratic Front, a conglomeration of four political parties formed for restoration of democracy in the hills, held its first public meeting today in Darjeeling over various issues plaguing the region and lambasted the Gorkha Janmukti Morcha and state government for turning a blind eye to those issues. The front picked out issues like the deteriorating law and order, undemocratic ways of the GJM and its insincerity towards the statehood demand including the apathy being shown by the state government in solving the Madan Tamang murder case.

The front’s members constitute the All India Gorkha League (AIGL), the Communist Party of Revolutionary Marxist (CPRM), the Gorkha National Liberation Front (GNLF) and the Sikkim Darjeeling Ekikaran Manch (SDEM). Pratap Khati, the AIGL general secretary and the DF convener, alleged the GJM of being involved in corruption and anti-national activities and demanded a probe. “From where is the GJM getting funds to run the party? Bimal Gurung is not a millionaire and does not have any known source of income. The central government should start a probe in this regard,” he said. Khati also pointed to the mysterious disappearance of Sanjay Thulung, the GJM central leader and Sabhasad accused of being involved in the Assam arms haul case earlier this year. “As per police investigations, Thulung is involved in anti-national activities. GJM leaders frequently visit the Northeast, which is the hub of insurgents. Although the GJM refutes this, but nothing happens without Gurung’s directives,” alleged the AIGL general secretary.

The DF convener also raked up the Madan Tamang murder issue saying the state government should initiate a judicial commission to investigate and get to the bottom of the case. “He (Tamang) was the only voice of democracy in the hills and he sacrificed his life to uphold it. However, nothing has been done by the state government to provide justice to the slain leader’s family. We demand the case be handled by a Special Investigation Team,” he said.

Tamang, who was the AIGL president, was hacked to death on May 21, 2010 in broad daylight in Darjeeling while overseeing preparations for the party’s public meeting. Investigating agencies have named several GJM leaders and activists in their charge sheet. Some of the leaders thus named have filed for bail for which the next hearing is scheduled on November 17. Govind Chhetri, spokesperson for the CPRM. alleged that the GJM and the BJP had betrayed the statehood demand. “We elected Jaswant Singh and SS Ahluwalia of the BJP as MPs but they have not worked for the statehood demand. The GJM president has embarked on a padyatra for Gorkhaland but it is only eyewash, to confuse the people,” he said.

Biren Lama of the GNLF, on the other hand, advocated for bringing the hills under the ambit of the Sixth Schedule, which he said would solve all existing problems. “We want the hills to be brought under the Sixth Schedule. And this is why the GJM’s demand for tribal status for various communities of the hills now has started,” he said. The front, however, did not announce its future political programmes saying it would do so after a meeting of its senior leaders in the days to come. 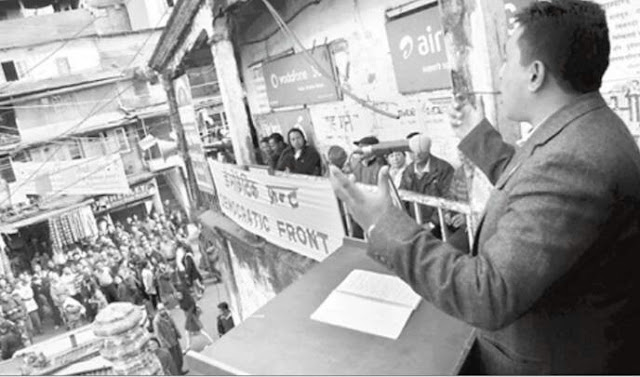