A four-member delegation of the Gorkha Janmukti Morcha today left for Kolkata for a bipartite meeting with the state government to discuss issues related to the Gorkhaland Territorial Administration.

The delegation, led by GJM general secretary Roshan Giri, comprises central committee leaders Swaraj Thapa, R.B.Bhujel and former Kurseong MLA Rohit Sharma, will raise issues including the appointment of voluntary teachers, transfer of departments, grant of tribal status to ten hills communities and establishment of a central university in the region, among others. Thapa, who is also a member of the GJM’s study forum, the intellectual wing of the party, said, “We will attend the bipartite talks with state government representatives at Nabanna tomorrow. The GTA principal secretary too will be present. We have about 14 points that need to be discussed so that the GTA is able to function properly and independently.”

The agendas pointed out in the stated government’s letter include transfer of departments, rules of business of the GTA, a multi-specialty medical college and hospital in Kurseong and other programmes of the Health Department. The issue of tribal status to the Gorkhas, re-introduction of the three-tier Panchayat System and Implementation of different developmental schemes, hill compensatory allowance to all GTA employees, subordinate service selection board, separate school service commission and college service commission for the GTA will figure in tomorrow’s talks.

When asked if the delegation would take up the issue of state government interference in the running of the GTA, Thapa said, “When we discuss the issue of transfer of departments, this matter will also be a part of it. It is due to the departments not being transferred properly that interference is being seen in the GTA, we feel.”

Relation between the GJM and chief minister Mamata Banerjee is at an all time low. The GJM allegation is that the CM is trying to divide the hill communities by setting up development boards and also interfering in the independent functioning of the council body. 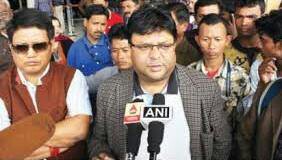