A day after accusation of corruption labelled by a senior Tamang Development board member Mr. Kamal Ghising against the Chairman Sanjay Ghising and Chief Advisor Neera Lopchan, yesterday Tamang Youth Association (TYA), Darjeeling sub-division committee has also accused the TD board of not including community members and discriminating against Tamangs from Darjeeling and Kurseong.

Speaking to the Press, TYA Darjeeling President Mr. Anand Lama stated that, "even after a year of formation of the TD board, the Chairman Sanjay Moktan has continued to work in a very shady manner and has been unable to bring together the community members... there is no transparency in the operations and functions of TD board."

Mr. Lama stated, "such is the label of high-handedness that the homes that are supposed to be built for community members are not being done according to the list prepared and approved for in the TDCB meeting... in fact far more houses have been sanctioned for Kalimpong, and not many for Darjeeling and Kurseong." 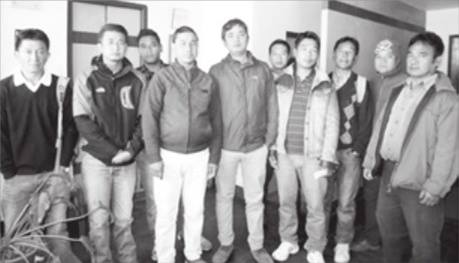 Speaking further on discrimination, Mr. Lama added, "even in the TD board executive committee which takes all the decisions, there is no board member from Darjeeling... as a result the poor people from Tamang community here are deprived of the facilities they are supposed to get... there is no one in the board to speak for them..."

Accusing Mr. Sanjay Moktan of running the TD board to suit his own personal needs, Mr. Lama said, "TD board was formed to conserve and promote Tamang language, dresses, culture and traditions... but today Sanjay Moktan is running the board like his personal property... with the 1st round of allocation for building homes, instead of giving money, TD board distributed building materials alone... and poor people were forced to build homes with just the given materials... how can anyone build a home without employing people who know how to build homes - masons, carpenters, electrician, plumbers - all require money... where would the poor people get money to pay?"

Stating that Tamang community is hurt, Mr. Lama added, "The way Mr. Sanjay Moktan is running TD board as his personal property, and its hurting all the Tamang community people... see for example we constituted a committee of 5 Engineers to inspect homes built with funds/materials provided by TD board... but till date no one from that committee has come to inspect houses in Darjeeling... instead Mr. Sanjay Moktan has sent those people who are not experts and who are not in this committee to inspect..."

Welcoming the statement and accusations labelled by Mr. Kamal Ghising against Sanjay Moktan and Neera Lopchan, Mr. Lama added, "the Darjeeling committee of TYA support the statement... we cannot allow a welfare organization to be run like someone's business... and if TD board officials do not change the way they run things, we will take up this matter with Sub-division committee, and even Bengal government."

[Inputs and pics via: Himalaya Darpan]
Via TheDC