A Gorkha Janmukti Morcha delegation today called on Union home minister Rajnath Singh who then called up the hill party chief, Bimal Gurung, and urged him to halt the Gorkhaland Janjagaran padayatra and visit Delhi for talks.

Gurung, who started the march on October 2, today said he has not yet decided whether he would call it off.

Today, a Morcha delegation, including party general secretary Roshan Giri, and senior leaders R.B. Bhujel and Rohit Sharma met Singh and urged him to form a committee to examine the statehood demand and call a tripartite meeting to discuss the political situation in the hills.

"We called on Union home minister Rajnath Singh and told him about the BJP's manifesto of 2009 and 2014 where it had been mentioned that the BJP will 'sympathetically examine and appropriately consider the long pending demands of the Gorkhas, the Adivasis and other people of Darjeeling district and Dooars region'. We urged him to expedite the process of forming a committee to look into our statehood issue," Giri said over the phone from Delhi.

Giri said he spoke to the minister about the padayatra undertaken by Gurung.

"After we apprised him about the padayatra, the home minister called up Bimal Gurung and enquired about his health. The minister also wanted our leader to sit for talks instead of undertaking such a long padayatra," Giri said.

Gurung has covered around 700km as part of the march. He had earlier said he would cover 9,000km and also walk to Delhi with the statehood demand. The padayatra entered its 32nd day today.

Giri said: "We also urged Rajnath Singh to call a tripartite meeting at a political level with the Union minister, chief minister Mamata Banerjee and our party president Bimal Gurung."

Addressing a meeting at Lower Echey in Kalimpong this evening, Gurung said: "At 9.05am this morning, the Union home minister called me and after enquiring about my health he urged me to stop the padayatra and go to Delhi for talks. I have not yet decided (about the march)."

The state's hill affairs department has convened a bipartite between the state government and the GTA to discuss 14 agendas about the hill body, like transfer of departments, formation of a subordinate selection committee and school service commission, among other issues, at Nabanna on November 9 .

The meeting would be chaired by chief secretary Sanjay Mitra. 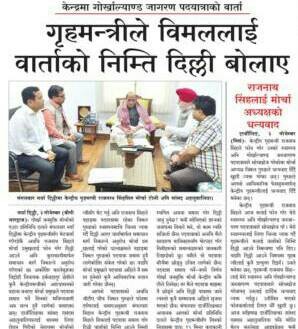