Shri Subash Ghisingh always stood for separate Indian Gorkha Troops reason being to differentiate the “Indo – Nepal Agreement Troops” and the “Indian Gorkha Troops” and for greater interest of India, there were series of talks and correspondence regarding this issue:
15th January 1987, Telegram sent To Shri Rajiv Gandhi, P M of India, Copy to King of Nepal:
We have no other alternative but to ask the whole settled Indian Gorkhas not to join the “Agreement Troops” of Gorkha Rifles. Furthermore, we are compelled to ask the central Government of India to immediately establish a New and Separate India Gorkha Regiment so as to save the whole settled Gorkhas from unnecessary and permanent stigma and allegation of Foreigners, Mercenaries, Reciprocal people and Nepal subjects.
3rd February, 1987 Statement released:
Urging government for formation of separate “Indian Gorkha Troops” to save guard the Indian Gorkha community and in the larger interest of Indian.
22nd July 1987, Letter To Rajiv Gandhi PM, India:
Point No 9, (iii) The “Indian Gorkha Regiment” must be established as soon as possible so as to make a clear distinction between the “Agreement Troops” and the “Indian Gorkha Troops” in the interest of the victimized Gorkha and in the interest of the country of Indian. After declaration of the Government Notification on the issue of citizenship, the recruitment of the aboriginal and the settled gorkhas to the “Agreement Troops” must be immediately stopped.
MOS was signed 23rd August 1988 between Subash Ghising (President of GNLF) and CG Somiah (Union Home Secretary) in presence of Sd/ Buta Singh (Union Home Minister) in Delhi.
As regards raising a separate Indian Gorkha Regiment, the policy of the Government of India of not having any new regiment raised on class composition was acknowledge. However, it was clarified that it is not obligatory for Indian Gorkhas to join only specified Gorkha Regiments and that they have the option to join the Regiments of their choice. To this extent suitable instructions will be issued by the Army Headquarters.

Recent political Scenario:
13th May 2008 “No More Gurkhas for India” Prachanda has asked the Indian state to stop the recruitment of Nepalese into the Indian military.
20th March 2012 – Times of India “Nepal may ban Gorkhas from joining foreign armies” Rajat Pandit, "As per our information, it's a proposal being studied in Nepal as of now...no final decision has yet been taken. We are tracking it closely," said a senior defense ministry official on Monday.”
21st March 2012 – Hindustan Times:
“Gorkha soldiers from Nepal who have been an integral part of the Indian Army for over six decades could soon become a thing of the past and a glorious chapter of valor and sacrifice by soldiers of a friendly neighbour would come to an end”
23rd January 2015: Daily Mai News :
“Stir in Indian army as Kathmandu mulls Gorkha ban”
Nepal government set to impose ban on joining Indian army by Gorkhas as Social media video of martyr Ram Bahadur Gurung generates acute breach amongst Indian army units.
Nepal’s communist Chief have been urging ban of Gorkhas in Indian army for quite sometimes further recent shift of foreign relation of Nepal from Indian to China and ongoing protest of Madhesis in Nepal which Nepal accuse India or BJP of providing logistics support to the movement of Madhesis (Indian origin Nepali) against the Nepal Government; Further the ongoing supply cut of petrol, diesel, domestic LPG and jet fuel by Indian and China coming in to supply 1,000 tonnes fuel to Nepal are seen as series of event which are creating rift between two countries.
Therefore the announcement made on 29th October 2015 to raise an additional battalions for Indian Gorkha is a strategic decision taken by ministry of defence (India)
The Army has several Gorkha regiments— 1GR, 3GR, 4GR, 5GR, 8GR, 9GR and 11 GR, with five battalions each. The stipulated ration of composition of these regiments between Nepalese and Gorkhas of Indian domicile is about 70:30. “The Army’s plans are that each Gorkha Regiment will raise an additional battalion, which will be done in a phased manner, beginning with 1 GR,” said Lt Gen Thodge. Unlike in the past where Gorkha battalions comprised troops primarily from Nepal, the new battalion, designated as the Sixth Battalion of the First Gorkha Rifles (6/1 GR), will comprise Gorkha troops of Indian domicile (Indian Gorkhas), that is, those settled in the hilly regions of northern India and the North-East.
Finally after 28 years, Indian government have now understood the significance of separate Indian Gorkha Troops for the safeguard of India and the Gorkha Regiment itself, what Mr Subash Ghisingh did in 1987 “The Great political foresighted Leader” Hamro Appa !
Jai Gorkha, Jai Gorkhaland ! 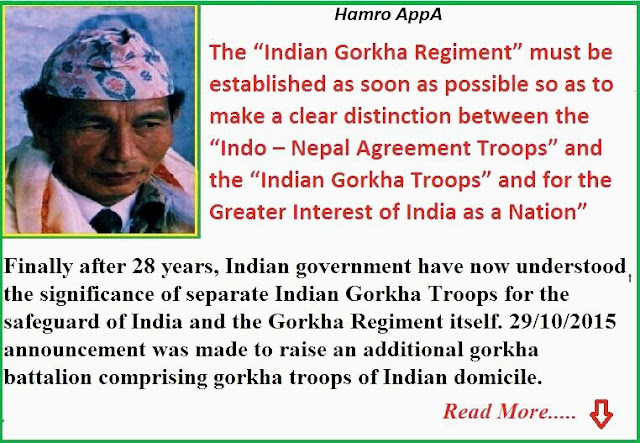