Shiva was placed second with 1550 points in the 56kg category, up five places from the previous list. The top spot was occupied by Irishman Michael Conlan (2150 points), who won the gold medal at the World Championships.

The 22-year-old Shiva became only the third Indian ever to clinch a medal at the showpiece event after Vijender Singh (2009, bronze) and Vikas Krishan (2011, bronze).

Vikas, who lost in the quarterfinals of the Doha event, was the next best-placed Indian at sixth in the 75kg middleweight division.

The Asian Championships silver-medallist is fighting in a category which Vijender made his own before turning professional earlier this year.

Satish Kumar, who was also a quarterfinalist in Doha, took the seventh spot in the rankings for super heavyweight (+91kg) boxers.

Another Asian Championships silver-medallist, L Devendro Singh, occupies the 13th spot in the 49kg category. The youngster from Manipur lost in the second round of the world meet following a cut above his right eye. He has 550 points in his kitty.

Former Asian gold-medallist Sumit Sangwan, who has been laid low by injury, was placed 18th in the 81kg division with 450 points. Manoj Kumar also occupies the 18th spot in the light welterweight 64kg list.

Gaurav Bhiduri, who created a flutter by notching up some good wins in the World Series of Boxing's season gone by, is placed 37th in the 52kg category. 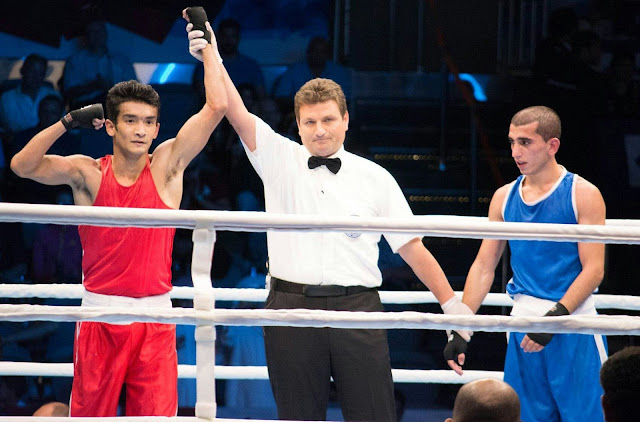