Shiva Thapa: Punching Above His Weight

Shiva Thapa is only 21, but is already the third Indian boxer after Vijender Singh and Vikas Krishan to win a World Championship medal. Like most achievements by Indian champions, Shiva Thapa’s bantamweight bronze in the World meet at Doha in October 2015 is the result of a lot of hard work and sacrifice.

Since Shiva’s father, Padam Thapa was a man of modest means. He did not think twice before selling his house, his land and his small-scale factory in Guwahati where he made make steel furniture – “only because nothing is more important to me than an Olympic medal.” Shiva Thapa’s tryst with the Olympic medal may be on hold but a World Championship medal is a no mean return.

After four daughters, his wife and Padam Thapa had two sons Govind and Shiva. So intent was the karate instructor that his offspring should reach the highest echelons of sport, he researched and concluded that there was maximum opportunity in an individual sport like boxing. So Govind and Shiva were initiated into boxing when they were nine and seven respectively and training began in their living room itself, where a punching bag was up.

An Early Start
While Padam Thapa picked up enough boxing to be able to coach them and spared no efforts to support their training, also ensuring that their education did not suffer either, the boys embraced his dream as their own. They did not protest much even when they were made to wake up as early as 3-30 a.m., so that they had enough time to study as well as train.

Shiva was first noticed at age 12, when he won his first sub-juniors gold in Noida, and was invited to train at Army Sports Institute, Pune. He continued with his sterling performances, winning silver at the Youth World Championships and Youth Olympic Games in Singapore, in 2010. Shiva marked his entry among the seniors with a gold winning performance at the Super Cup in Mumbai in May 2011, following it up with an international title winning performance, with a victory over the reigning world champion Dalakliev Detelin in Belgrade in September 2011.

Education Not Neglected
He notched up gold at the National championship at Karaikkudi in Tamil Nadu in December that year. And despite the disappointment in the Olympic Games in London in 2012, the Asian Games and Commonwealth Games in 2014, Shiva Thapa was able to justify his talent by winning the Asian Championship title in 2013.

Brimming with confidence, this new age boxer relies more on intelligence and skill to hold him up in the ring, rather than aggression and brute strength, a hallmark of the earlier lot of successful boxers from Haryana. Shiva is amongst the new breed of sportspersons, who believe in educating themselves and pursued BA through correspondence.

To be an inspiration for younger boxers at just 21 years of age is quite something, isn’t it? 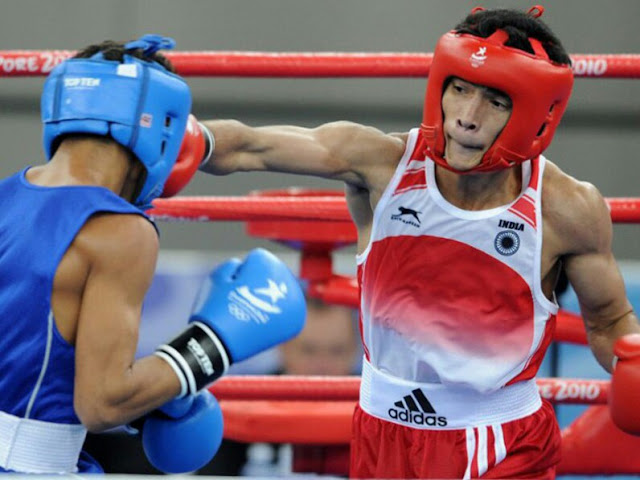