The CPRM today alleged that Bimal Gurung was distributing money to people during his ongoing padayatra and urged the government to investigate his source of funds.

The Communist Party of Revolutionary Marxists launched a broadside against the Gorkha Janmukti Morcha president at a public meeting organised to mark its 19th foundation day.

"Wherever Bimal Gurung is going, he is distributing cash. Where is this money coming from? The Bengal government and agencies like the income tax department and vigilance must be proactive and look into this issue," Govind Chhetri, the spokesman for the CPRM, told the gathering at Chowk Bazar here.

The CPRM alleged that Gurung was distributing cash to tea garden workers and the common people during his padayatra. The march, which was started by Gurung on October 2, on Gandhi Jayanti, was suspended yesterday as he left for Delhi to take part in a three-day dharna on Gorkhaland starting from December 17. The procession will resume when Gurung returns to the hills. Sources in the Morcha couldn't say when the GTA chief executive would be back in the hills.

"He (Gurung) started his statehood movement on Gandhian principles (non-violence and democracy) but now we realise that his objective is the Gandhis on the note (currency)," Chhetri said, implying that the Morcha leader was after the Indian currency, which bears the image of Mahatma Gandhi.

"The padayatra was started on the lines of Mahatma Gandhi's agitation path but while the Father of the Nation used to stay wherever possible, this padayatra is turning out to be a big picnic with the leader staying at rest houses and guest houses."

The Morcha denied the charges raised by the CPRM.

Jyoti Kumar Rai, the assistant general secretary of the Morcha, said: "Gurung is not distributing money anywhere. He is helping some people on medical grounds through the GTA. He is distributing cheques to poor people to construct houses through Hamro Ghar Yojana of the GTA. That is all."

The CPRM also attacked the administration for registering cases against hill opposition leaders for taking out a rally from Gorkha Dukha Niwarak Sammelan Hall to Chowrasta where ABGL leader Bharati Tamang was to sit for a hunger strike demanding justice in the case related to the murder of her husband.

"Look at the way the administration behaved against us. We were seeking justice but cases were slapped on us. The convoys of leaders throw public life out of gear when they move along the highway but no cases are slapped on them. Even the police officers present at the venue behaved very rudely with Bharati Tamang asking her to hold her hunger strike at her home," said Chhetri.

"It is just a matter of time before the killers of Madan Tamang are brought to book," said Chhetri.

Bharati had sat on the hunger strike on June 14 under the banner of the Democratic Front, a conglomeration of ABGL, GNLF, CPRM and Sikkim-Darjeeling Ekikaran Manch. The Front leaders were charged with blocking road on the day they took out the march from Gorkha Dukha Niwarak Sammelan Hall. 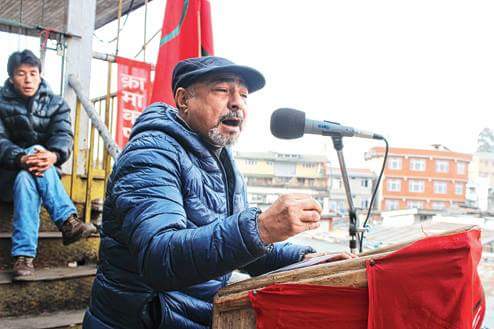