A high level delegation of the Gorkha Janmukti Morcha led by its president Bimal Gurung and Darjeeling Lok Sabha MP SS Ahluwalia called on the Union commerce and industries minister Nirmala Sitharaman in Delhi and served her a memorandum placing various demands on behalf of the tea garden workers.

The memorandum places two very important demands:
1. Bringing the tea gardens under the purview of Minimum Wages Act.
2. Increasing salary of tea garden workers to Rs. 322 /- as of September 2013.
3. Issuing Land Rights to the tea garden workers
4. Reopening of all the shut down gardens in the region.
The minister has assured that she is keeping a close eye on the plight of the tea garden workers and will take necessary steps to remedy the situation at the earliest.

The GJM delegation highlighted number of important issues relating to the tea industry in Darjeeling, Terai and Dooars region to Smt Nirmala Sitharam.

The first related to bringing all tea garden workers in these areas immediately under the Minimum Wages Act 1948. It is sad and unfortunate that thousands and thousands of tea workers employed in the plantations in these areas till this day continue to earn a pittance that is decided by the tea garden management. This notwithstanding the fact that in the rest of the country workers in scheduled employment enjoy benefits under the Minimum Wages Act 1948. 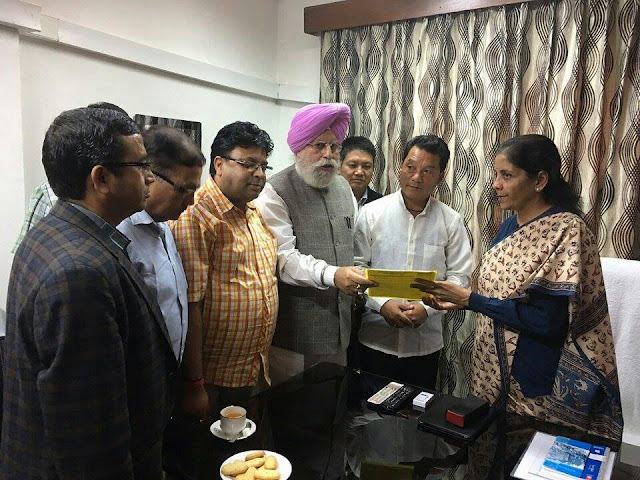 The second issue related to death of 22 persons by malnutrition so far in the tea gardens of Darjeeling Terai and Dooars since May 12, 2015. The starvation/malnutrition deaths due to closure of tea gardens are as follows; Panighatta 5, Hantupara 3, Dumsipara 6, Bagrakote 7, Nagaisjree 1. Considering the sensitive situation in these closed tea gardens, there is an urgent need for intervention by the Centre so that more lives are not lost.

Presently many tea gardens in the Dooars region have remained closed and death toll due to starvation/ malnutrition has reached over 1000 since 2002. Due to the lack of basic living amenities like calorie-based food, medical facilities, potable drinking water, access to alternative employment opportunities and minimal wages, human trafficking, especially child trafficking is rampant in the region, and even the local social organizations and government agencies seem to be unable to handle and curb the growing instances of trafficking activities.

Besides these closed tea gardens, there are some other tea gardens also which have faced closure for some time now. The GJM delegation appealed to the Central government to take immediate steps to ensure that these closed gardens begin operations without any further delay so that workers are able to work and get their rightful due.

The issue of granting Pattas (Land rights) to the tea garden workers in all tea gardens is another demand of the Gorkha Janmukti Morcha, which we have been seeking. We would like to request that the Centre intervene in this regard so that landless tea garden workers, who have been deprived of land for generations now, will finally be able to own a piece of land.

The Darjeeling and Dooars tea are famous world over. The Darjeeling tea has been accorded the Geographical Indicator (GI) status by the World Trade Organization, making it one of the most well recognized brands of tea across the world. Notwithstanding this deep market penetration by ‘Indian tea,’ the huge working population – more than 4 lakhs permanent member, out of which more than three lakh permanent workers are there in the Districts of Jalpaiguri and Darjeeling, who are engaged in the tea sector in West Bengal.